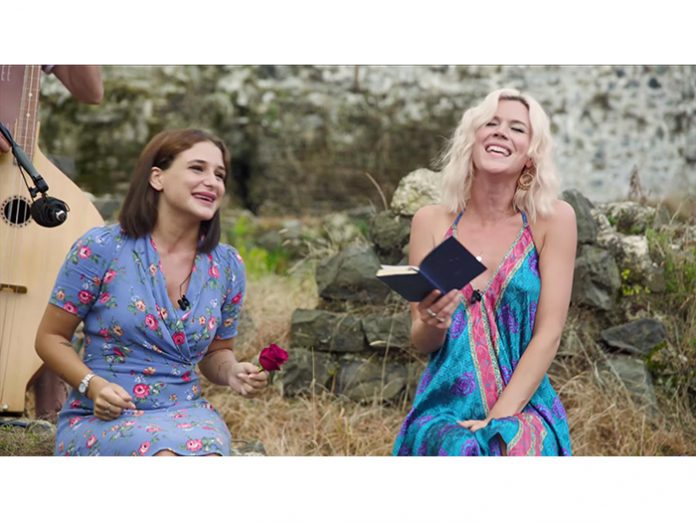 “My mission,” she explained, “is to explore and understand the universal language of music in every country on this planet. The result of music has never been a negative one and it shows us that we all have something in common: we can all cry and we can all laugh. Music is emotion and in music we are all one.”

This unique project, which ran parallel to Stone’s current world tour, has already seen her visit more than 138 countries and record informal performances with local musicians in each one. She also visits local charities and films each visit so that footage can be release online and used as a platform for international fund raising.

Stone’s long-term sound engineer, Chris Sennett, captured sound for the video footage with d:screet 4060 Miniature Microphones in the DPA Concealer, which are ideal because they deliver studio quality sound while being very unobtrusive.

“Joss’s collaborative performances with local artists are meant to be intimate and we often record at outside locations where we have to contend with ambient noise,” he explained. “The d:screet 4060s are ideal because their small size makes it possible to hide them in Joss’s clothes so that they are not obviously in shot. We mount them in a DPA concealer that holds the microphone firmly in place and helps reduce noise from her clothing. This has proved to be the best, most consistent and efficient way to capture audio while still being ‘discreet’ about it. And, of course, it sounds fantastic, too.”

Sennett added that his regular workflow for mixing these collaborations had been shortened because less work is needed to get a great sound in difficult environments.

“Using the concealer really helps with wind reduction and, so far, I’ve only had to add extra wind protection on one occasion – when we were recording in a desert with high winds,” he said. “That video has created a lot of interest with people asking if we overdubbed, but we didn’t, and that’s down to the spectacular sound quality of these microphones.”

While accompanying Joss Stone around the globe, Sennett looked after all technical aspects of the production and records audio for the collaborations and charity visits. He also manned a camera whilst recording the collaborations as they only have one main videographer with them. Travelling with him were 2 d:screet 4060 microphones 2 d:vote 4099 Instrument Microphones, which were used for Stone’s concert performances in each location.

“They are incredibly reliable, and they never miss a beat,” he stated. “We have put them through some seriously hot and humid environments and they don’t falter one bit.”

As well as d:screet and d:vote microphones, Sennett also used d:dicate 4011A Cardioid Microphones during a series of 5 concerts in the UK where Stone played with a small orchestra.

“As soon as I got wind of the shows my immediate decision was to put d:vote 4099s on all strings and horns, which totalled to 14 units,” he explained. “This gave me and FOH engineer Dan Sennett a real chance at getting maximum separation between instruments. Joss likes to perform with a close stage setup, so we need as little spill between microphones as possible. I also opted for 2 pairs of 4011As as overheads on the orchestra giving us the ability to breath some extra life into the d:vote 4099s. I also used 3 4011As across the front of the stage to give full coverage of the crowd to those wearing IEMs.”

Microphones for the recent concerts and the world tour were supplied by DPA’s Sound Network in London – a company that Sennett has nothing but praise for. “Sound Network has been fundamental in improving the quality of the content we produce,” Sennett said. “Their support has been second to none. Adam Pierce has been spectacular with his advice and customer relations. I wouldn’t go anywhere else!”