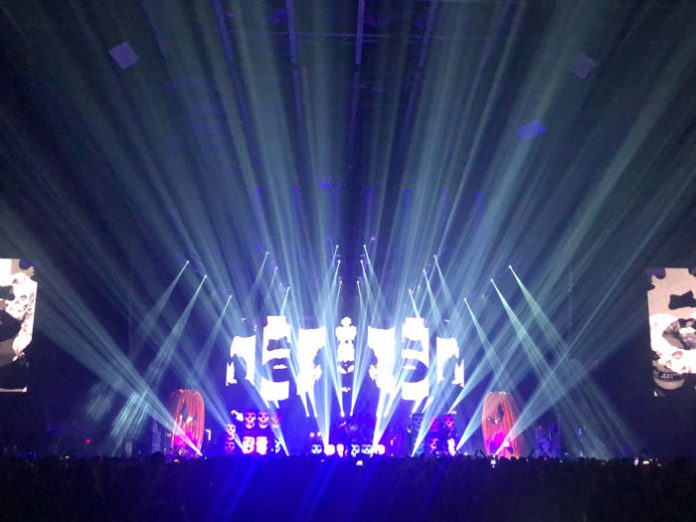 Lighting/Production Designer Jon Eddy is using 38 Claypaky Sharpys to illuminate the Original Misfits reunion shows featuring Glenn Danzig and Jerry Only. He also incorporated his Misfits lighting design into 2019 Psycho Las Vegas, the massive metal/punk rock festival held annually in August. Eddy is marking his fourth year designing for Psycho Las Vegas. The Original Misfits got back together for a series of gigs last year and continues to play selected venues in 2020. Their next appearance will be headlining Mexico City’s Domination Fest in May.

The reunion shows, which included dates in LA, Denver and Seattle, coincided with the band’s 40th anniversary; they sold out their date at New York City’s Madison Square Garden.

Eddy designed the shows with a huge fanned out finger rig; six of the long fingers feature 18 Sharpys, bottom hung. An LED video wall is upstage split into seven 5 by 20-foot strips with strobes and blinders in between on ladders. 12 Sharpys are bottom hung on upstage GT floor towers. An additional eight fixtures are on the downstage edge of the deck. DSS, provided the fixtures.

“Sharpy has been the main workhorse in my rigs for almost 10 years now,” said Eddy.

“They’re the best, with the most even beam and fastest, smoothest motion – even with the pin spot beam at its narrowest – that beats every other beam fixture.”

Eddy noted that: “Sharpys have always been the go-to fixtures that have set my shows apart. I love using beams and negative space in my designs.”

Psycho Las Vegas grows larger in production, budget and size each year. Although the festival has its roots in heavy metal and rock, the lineup has become more diverse than ever. The Mandalay Bay Resort and Casino hosted three days of the 2019 festival, which included headliners Misfits, Electric Wizard, High on Fire, Clutch, Opeth and Beach House. DSS provided Eddy with the festival’s Sharpys. He is already planning for the 2020 event upping the Claypaky complement to 30 Xtylos, 20 Sharpy Plus fixtures, 32 new ReflectXion next-generation moving mirrors and eight A.leda B-EYE K20s.

Eddy likes “the three colour wheels in the new Sharpy Plus with amazing blended split colours and colour mixing, an animation wheel, two rotating prisms and rotating gobo shakes. There are so many new tricks with this light!”

Looking ahead, Eddy is “excited” about the new ReflectXions, which he predicts will “open up whole new worlds of magic for everyone to see,” and he “can’t wait” to get his hands on Xtylos compact beam moving lights. “It will be a game-changing year for Claypaky,” he forecasted.