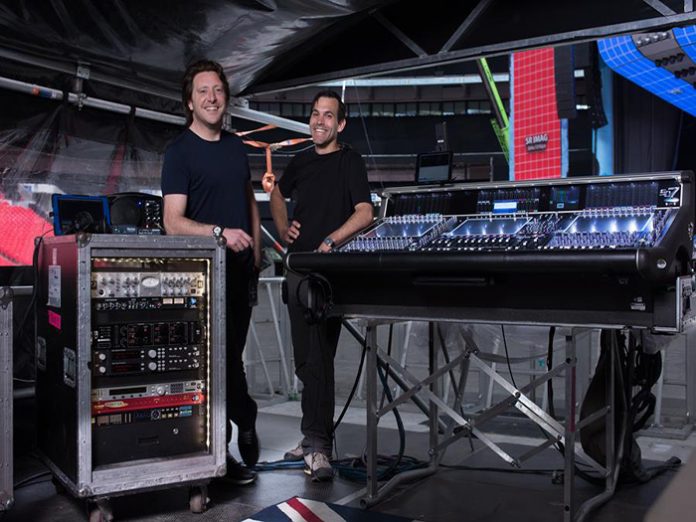 Having circled the globe for more than a year, Ed Sheeran’s Divide tour recently arrived at London’s Wembley Stadium for a string of critically praised homecoming shows. Performing before sold-out, 80,000-strong crowds, Sheeran once again proved that one man and a guitar are more than enough to fill a stadium, while Audio Systems Engineer, Charlie Albin, and Front of House Engineer, Chris Marsh, ensured the technical production was faultless. Helping them to do so was a more recent addition to the touring rack – a JoeCo BLACKBOX BBR64-MADI multi-track recorder described by Albin as “making my day much easier”.

Capable of 64-track recording at 48kHz, the JoeCo BLACKBOX BBR64-MADI is used to capture every Ed Sheeran performance, usually comprising 16 channels of vocal, acoustic guitar and loops. Albin discovered the JoeCo multitrack recorder shortly before the Divide tour began, and it has since become a permanent and much relied upon addition to the tour’s FOH racks, not least for virtual soundchecks.

“We record every single show and check it the next day,” he explained. “Basically, because of the busy schedule Ed is rarely available to soundcheck on stage, on the day, before a show. So our only way of checking what the venue is going to sound like is to use his previous night’s performance.”

The JoeCo BBR64-MADI takes a feed of Sheeran’s vocals and guitar directly from the DiGiCo SD7 at FOH, as dry input channels. For the virtual soundcheck these come back into the same channels that can then be EQ-adjusted for the venue. The process requires that all recordings are of the highest quality and as neutral as possible, uncontaminated by any previous processing dictated by prior conditions.

“We also take a left-right board mix as a reference,” added Albin, “and maintain some sub-groups for various purposes – usually a broadcast pre-mix, because this is not like a regular band. A lot of engineers would struggle to piece together certain details in a short space of time.

“It’s a multitrack recording, which gives us the option to create a broadcast mix. If there’s a special guest we may want the appearance documented or put out online in some way. Chris can actually do that on-site; we often carry a pair of studio monitors with us so we can put the recorded tracks back through the board and do a bespoke mix. Sometimes a third-party engineer will need a mix for a specific awards ceremony, for example, and will bring his own recording setup: in that instance we’ll use our JoeCo BLackbox as a backup.”

Beyond even this, Albin has found applications for the JoeCo BBR64-MADI: “The BLACKBOX has also been very helpful in fault-finding. For example, Ed’s loop pedal is a completely bespoke product, with software programmed by a coding expert, and a couple of weird bugs have cropped up. We’ll notice during a performance that the same artefact comes up at a certain point, and the only way to prove our suspicions is to turn to the recordings: we use them to verify the issue and confirm that we’re not going mad. We can’t get Ed up there to try and recreate it; it’s the kind of thing that only happens in a show, and the recordings give us a snapshot of that. It’s impossible to replicate, so the recordings are hugely valuable.”

Albin offers further praise for the JoeCo BLACKBOX’s looping function (used for both the virtual soundchecks and troubleshooting) and MIDI programmability, for section-by-section patch changes and the creation of playlists.

“It is so much more reliable than any previous methods we had to do this, which were PC-based,” he reflected. “It’s a small rack-mountable unit which is permanently set up and dedicated to its task, it’s very tidy in the workspace and something that makes my day a lot easier. In fact, we’ve not had a single technical problem with the BLACKBOX MADI Recorder in the 18 months we’ve been using it. It’s also future-proofed: if at some stage Ed decides to add a band and even an orchestra we can very simply daisy-chain multiple units together. The software remote control interface recognises the extra units and they’re all controllable with one touch.”