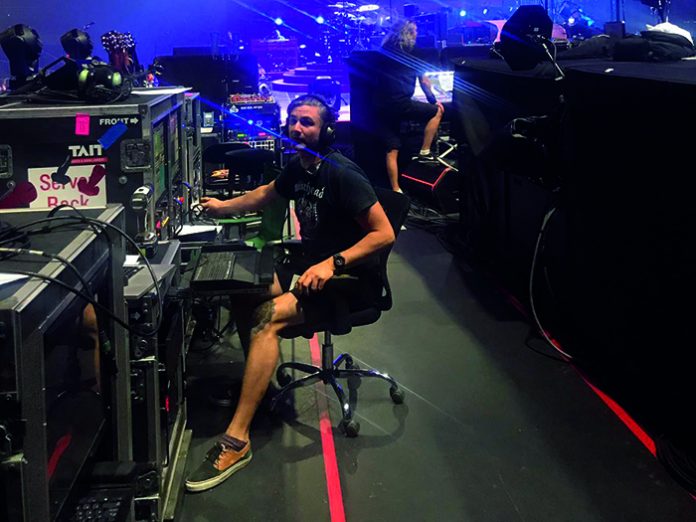 How did you initially get into touring production?

“When I was 20-years-old. I had just come out of Manchester City College having completed my National Diploma in music technology. A friend of the family told me to send my CV to Jake Berry [Production Manager]. I sent him my info, convinced that nothing would come out of it, as he looked after The Rolling Stones and U2. But to my surprise, he replied saying he would keep me in mind for future jobs. But things were quiet as 9/11 had just happened and a lot of tours had been cancelled. Just a couple months later I received an email from Clair Global offering me a job as a Sound Technician for the Bob The Builder Live. It was an arena world tour & lasted 2 years.”

How did you decide to specialise?

“Originally, I started in sound and did that until 2008. I had been doing a lot of corporate work in my native Spain and decided I didn’t like my job anymore. I remembered that in my early touring years, I used to enjoy helping the carpenters with the set when I didn’t have anything to do. So, I again got hold of Jake and offered my services as a set carpenter. After 3 years as a carpenter for Walking With Dinosaurs, I managed to get into the automation department, and have been happily operating ever since.”

What are you working on at present?

“I’m currently the Head of Automation for the Queen + Adam Lambert. As I type, we’re doing a residency in Las Vegas. I have also been running automation for Dynamo’s tour this year.”

What gear do you work with daily?

“I use different systems depending on what gigs I’m on. On Queen + Adam Lambert, we’re using a range of different pieces: hydraulic scissor lifts, variable speed chain hoists, and some self-climbing prop lifts. We run it all on TAIT’s control system, Navigator. Whereas on Dynamo, I used a few variable speed chain hoists and a few winches for moving curtains running off a Kinesys system.”

You’ve been touring internationally for some years now – what are the best / worst aspects for you?

“The worst aspect is the obvious answer; missing home, family, friends and partners. I also miss cooking for myself! As nice as it is being catered for on a daily basis, I really enjoy getting in the kitchen and cooking. I also miss being able to have a dog.

“The best, apart from travelling the world, (which I still enjoy), is working with good people. I have made some great friends on the road in the past 16 years. Most of the friends I’ve made are the kind of personalities you wouldn’t find in a ‘normal’ work environment.

When you’re not on the road, what would we find you doing?

“I spend as much time with my friends as I can, and try and keep busy by surfing, snowboarding and swimming. Plus… I’m not going to lie; I do a fair bit of hanging out at the local pubs in my little Spanish town!”