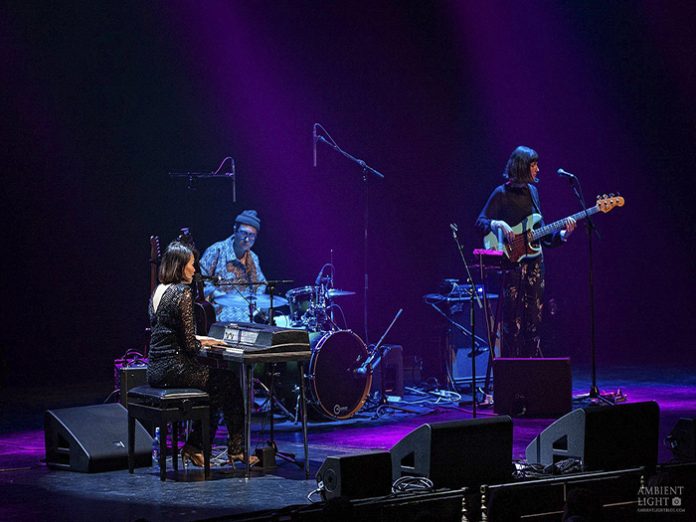 Released in August 1997, Bic Runga’s debut release Drive is regarded as one of the most iconic albums in New Zealand music history. To celebrate the 20th anniversary of the album’s landmark release, Bic Runga embarked on a series of concerts in which she performed Drive in its entirety, along with a selection of greatest hits.

To ensure exceptional live sound for performances of an album that won an award for its audio engineering, Jands provided FOH engineer Kevin Bennett with a complete JBL by Harman VTX A12 sound reinforcement system for the Auckland stop of the tour at the Civic Performance Art Theatre. Featuring a dual 12 inch line array speaker purpose-built for mid- to large-size touring applications and high-end fixed installations, the A12 was perfectly suited for a concert at the Civic Performance Art Theatre.

“When I was given the opportunity to mix with the VTX A12, it was a no-brainer,” said Bennett. “I’ve never received as many compliments from an audience as I did after this performance. Sonically, the A12 is incredibly smooth and provides excellent coverage, both on- and off-axis. The A12 sounds so great right out of the box, it didn’t require much tweaking to optimise the system’s performance in the theatre.”

Bic Runga also took note of her fans’ reaction to the sound quality provided by the JBL VTX system. “The audience’s response to this show was even greater than I expected,” said Bic Runga. “Kevin Bennett’s experienced mixing combined with the sound system to give the show an extra clarity and presence that translated to a special listening experience for the audience. A lot of fans commented that they were particularly moved by the excellent sound quality of the music.”

The array was comprised of 4 ground-stacked JBL by Harman VTX A12 speakers per side to cover the floor area, 6 flown A12 speakers per side to cover the balcony, and 4 JBL by Harman VTX G28 dual 18 inch subwoofers deployed on the ground to supply deep and punchy bottom end. VTX-M Series monitors provided clear and accurate monitoring for the musicians onstage, and Bennett relied on a Soundcraft Vi2000 digital console for mixing.

“We’re thankful for the opportunity to help Bic Runga bring her classic album Drive to life with a world-class JBL VTX sound system,” said Tim Robertson, Tour Sound Manager, Jands. “We’ve seen a tremendous amount of interest in the VTX A12 since the concert, and our goal is to have it requested on more technical riders in the New Zealand market.”

JBL by Harman VTX A12 features a redesigned rigging system that allowed the College Hill Productions team to deploy the entire rig with speed and efficiency, while the Soundcraft Vi2000 digital console enabled Bennett to craft a spectacular live mix that delivered all the sonic nuances of the expertly engineered album.

“The system was amazingly quick to deploy—when I arrived to set up the console, the PA was nearly flown and ready to sound check before I was,” said Bennett. “I’ve worked previously with Soundcraft Vi consoles, and their straightforward, analog-like workflow provides an intuitive and enjoyable mixing experience. The Vi2000 is now my go-to console, thanks to its superior sound quality and tour-grade reliability. And I love that it features the BSS DPR901ii Dynamic EQ.”

“It is a privilege to see JBL and Soundcraft products supporting a truly special performance by Bic Runga,” said Ramesh Jayaraman, VP & GM, Harman Professional Solutions, APAC. “For decades, we’ve worked with artists and touring personnel to better understand their challenges and provide best-in-class solutions. We thank our partners JANDS NZ for their expertise and loyalty, and we look forward to working together to facilitate more incredible live music experiences in New Zealand’s touring community.”