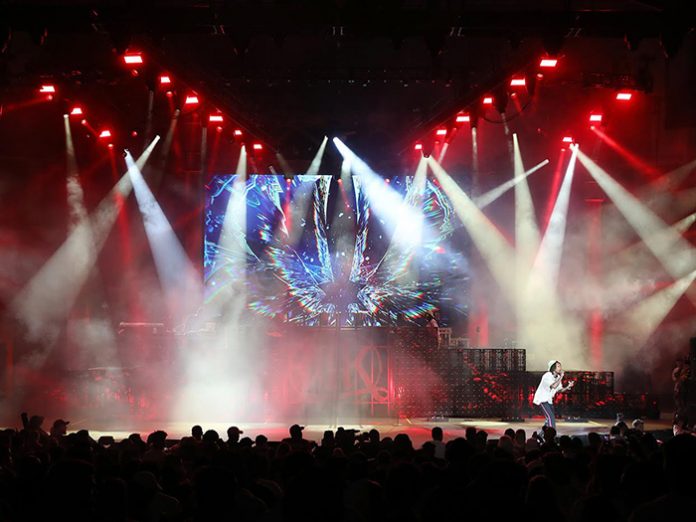 In 2009, a friend introduced Jason Bullock to an early model of the ChamSys MQ100. It was pretty close to a case of love at first sight.

After playing with the console, Bullock took it out on the Summer ’09 NINJA tour he did for Nine Inch Nails and Jane’s Addiction. “After the tour, I was convinced the ChamSys was the console for my style of show,” recalled the New York-based designer.

That style, with all of its big looks, bold statements and roaring intensity was on full display this summer in Bullock’s work on the 27-city Wiz Khalifa and Rae Sremmurd Dazed and Blazed tour.

Running the boards for both artists, Bullock took audiences on a breathtaking visual ride. Only now, instead of his original MQ100, he ran his 25-universe (not counting video) 250-fixture show with a ChamSys MagicQ MQ300 Pro supplied by Upstaging, Inc. out of Chicago.

“Justin Collie and the team at Nimbilist were responsible for the overall design of this tour,” he said. “Their design combined a brand-new set and video system that exemplified the direction of Wiz’s new album, Rolling Papers 2. My long experience with Wiz as director allowed us as a team to get this tour together in a very short timeline, even with the new systems.”

There were multiple features on Bullock’s ChamSys console that made this process go very smoothly. “Being able to import cue lists from prior tours — button settings, titles, timings etcetera – saved us hours during the programming phase,” he said.

“Direct access to palettes for programming (group 1, position 3, color 4, beam 6, enter) gave us an unprecedented level of speed. Not having to go search through touchscreens was far more efficient when it came to raw speed. Last but not least are the faders. By having extra buttons when FX get added or things change on the fly, you always have a place to record when trying to operate and edit at the same time.”

Efficiency was extremely important to Bullock when preparing for the Dazed and Blazed tour. “When this tour was programmed, we had only three days to get the whole project show ready,” he said.

“Video director Kevin Williams and I have worked together on previous Wiz tours. To maximize the possible applications of our system we developed an active system. Content to different layers and location is controlled via Catalyst. Kevin then takes that content and applies FX and mixes it all together with multiple cameras and robo-cams as a composite.

“The whole process in general was very smooth, which is amazing given the volume of work we did,” continued Bullock. “Working with Justin and his team was a great experience. We met 15-20 years ago. It was awesome to work with him and get this show together very quickly. Without the ChamSys, I would not have been able to pull it off.”

So today, almost a decade after Bullock first encountered ChamSys, his love affair with the company’s console is still going strong.