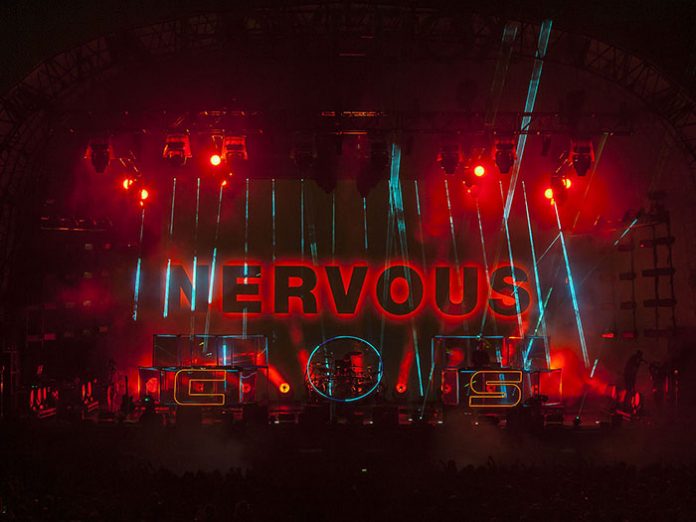 Lighting and Visuals Designer Andy Hurst wanted to make a big impact and keep the wow factors flowing for Chase & Status acclaimed Saturday night headliner set at the 2017 Lovebox festival in London’s Victoria Park so he designed an epic specials package which was supplied by HSL, together with crew – which was installed under the event’s production ‘top rig’.

The extras included 194  SGM Q-7 LED flood / strobes, used highly effectively for the strobe-tastic onslaught that you expect at a Chase & Status gig as well as super-bright floods and audience blinders.

The Q-7s were rigged so they effectively worked together in linear strips, wrapping around the back and sides of the stage, the PA wings and the portrait format IMAG side screens, also integrating these screens into the performance space.

Hurst loves creative challenges and is known for his fresh approach.                                “I wanted this consistency and coherence in the look to put the band right at the centre of the aesthetic, and also bring a structural integrity, depth and a sense of perspective,”

With a get-in at 3am the day of the show, and a number of other considerations, it was vital that the design be practical to install as well as looking cool and dynamic.
Upstage five trussing towers were deployed – suspended from a truss in the roof and also anchored to the floor on bases, each outrigged with 16 Q-7s which took care of 80 fixtures and made up an impressive upstage matrix of lights behind the ‘house’ video screen, a 12MM surface from CT – made up from a semi-transparent product at Hurst’s request.

This worked perfectly for through-the-screen retina-burn effects and contrasted completely to when the screen content was running, which was a mix bold ambient video and footage of various guest vocalists who have worked with Chase & Status.
The band has used this as a vehicle to bring virtual – but larger-than-life – artists to stage in their shows for some time.
Emile Sande, with whom the d&b duo have collaborated for their new single, Love Me More made a surprise live appearance to the delight of the very enthusiastic crowds.

The side trusses were angled slightly and provided rigging for seven wide by four deep grids of Q-7s each side, consuming another 56 units, with a row of Kinekt lasers along the top from ER.
Lasers are a light source that feature frequently and innovate in Hurst’s designs, and on this one he utilised a total of 44 Kinekts. In addition to these upstage ones, another 10 a side were rigged on the angled side trusses, alternated with more Q-7s on drop arms.

Another eight Q-7s a side were rigged vertically – four each on two offstage towers – and the Q-7 picture was completed with 10 fixtures rigged up the most offstage towers the other side of the IMAG screens, with seven a side along the bottom of the screen all of this giving the full wrap effect and endless possibilities for the full on maelstrom of a light show that accompanies a Chase & Status performance.

Ten Vari*Lite 6K beam lights were positioned on the floor behind the band, from where they blasted powerful piercing beam effects into the audience and aerials into the sky.
The specials package was completed with 12 Robe LEDWash 1200s, six a side on the deck or low level cross lighting and two at the back offstage from the row of VL6000s.
The design gave Hurst all the energy and movement he needed to light another incendiary performance spectacularly and memorably.
He utilised his own Road Hog Full Boar control setup, and HSL’s crew of three comprised Andy ‘Paris’ Hilton, Kevin Parrott and crew chief Matt Brown. All lighting elements of the show were coordinated and project managed in the office by HSL’s Jordan Hanson.

“They were all fantastic” commented Hurst, “We did a lot of pre-production work and a detailed prep up in Blackburn to ensure that all ran like clockwork on site. It was a lot of hard work for a one-off, but it was worth it – everyone was very happy with the results!”