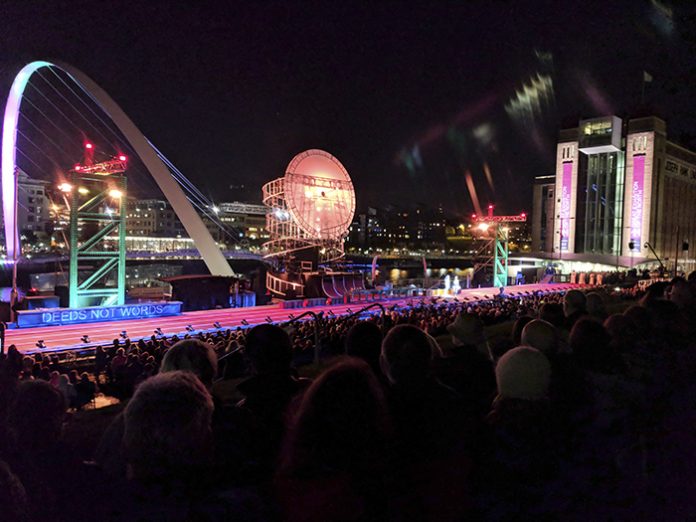 IPS provided all the lighting and sound production, along with the production structures for The Great North Star performance in Newcastle. The event was the grand finale to the Great Exhibition of the North.

Televised on the BBC, the ambitious outdoor performance celebrated pioneering woman through sporting history. The event took place outside The Sage Gateshead, with the Tyne and cityscape providing the backdrop to the night time performance.

Andy Marshall headed up the IPS onsite team, working with Production Manager Nigel Mousley and Director Bradley Hemmings. Over 400 lighting fixtures were used on the production, almost all of them from the IP rated range of the IPS hire inventory.

A 100m running track provided the performance area for the event, with scenic specialist Stage One suppling the stage structure and impressive set pieces (including working crane), with IPS working alongside to integrate show lighting within the set. Electric Foundry supplied LED practicals built into the set – including the illuminated text on the I-Beam lifted by the crane as part of the performance.

IPS delivered a full d&b audiotechnik solution, with 24 cabinets of V-Series line array, reinforced with 12 V-SUBS and 2 J-INFRA subs. Y10P cabinets and M4 wedges provided monitoring and infill, and the system was driven by a combination of D80 and D20 amplifiers. Sound coverage was complicated by the site layout, with audience areas split over different sections at varying heights up a sloped quayside.

Sound was designed by Jon Sealey and operated by Alex Adamson. Extensive use was made of the d&b Array Calc software to model the audio output, and ensure the coverage was as required onsite. All amplifier settings were exported directly from Array Calc as part of the pre-production at IPS to ensure everything was ready to go when arriving onsite. Qlab provided 24 channels of audio playback, and Shure radio mic systems were used for the performers, along with Sennheiser IEMs.

Control duties were handled by a Yamaha CL5 desk, with the main audio signals being run over fibre cabling due to the distributed nature of the site. Yamaha’s new Rio D2 digital stage boxes (used with the new Yamaha network switches) enabled the input and outputs to be easily distributed to ensure that the complex IEM routing could be achieved.

The impressive lighting was designed by Phil Supple and programmed and operated by Alex Passmore with IPS dealing with all the practical logistics of supplying and installing the hardware. Pre-production and programming was completed in the IPS WYSIWYG Suite, with a WYSIWYG computer also supplied onsite. Control was from a MA Lighting GrandMA MA2 fullsize, with an  MA Lighting MA2 Light as a backup, again with a fibre link providing cabling between the performance area and control position.

Due to the location and set design, the majority of the fixtures supplied were IP rated, chosen from the extensive IPS stock with manufactures ProLights and SGM particularly well represented. 42 ProLights Panorama Wash WBX IP fixtures were used within the set (a fixture that was amongst the nominees for the PLASA Innovation Awards 2018), and clever use was made of the segment control of these LED heads and pixel ring, with detail lighting from 80 ProLights RGBW StudioCOB fixtures, and additional wash from 40 SGM P-5 and Q-7 fixtures.

Continuing the IP rated fixture count, 18 SGM G-Profile Turbo LED fixtures and 20 ProLights Panorama IP Beam fixtures helped to create a big look, with ZR45 smoke machines providing some added atmosphere as required. The Tyne Bridge was lit with Martin MAC Viper Performance fixtures – ten were used in total with others assisting with the stage wash, and 4 large format followspots were also used to highlight performers in the form of Robert Juliat Cyranos.

Six SGM P-10 fixtures were also used for large area wash coverage, including lighting the large banners in front of the Baltic Centre for Contemporary Art – with all fixtures contributing to the spectacular look of the show.

IPS also supplied a series of Layher structures including a twin level Front of House control structure, two Followspot towers and two projection towers, all built within a tight build schedule. The structures were designed and built to suit the available space within the control compound, and fitted with concrete ballast which enabled them to be secured on the hardstanding area and then removed again without a trace.