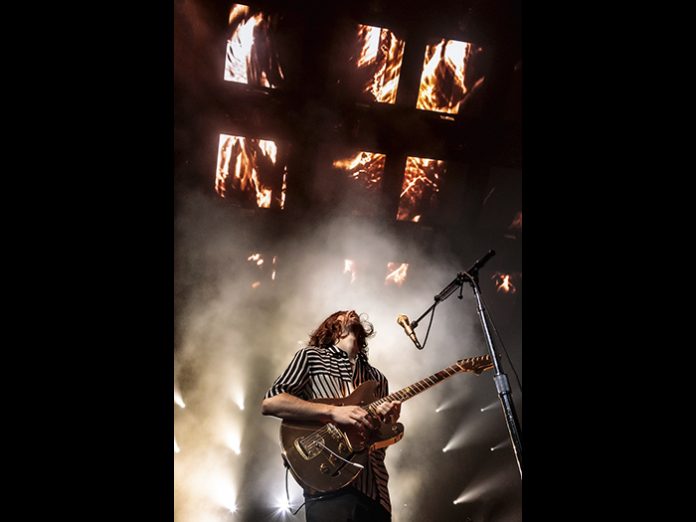 With total album sales topping 12 million and more than 35 million singles sold, Imagine Dragons continue to soar – and the Las Vegas band’s live gigs no doubt play a significant part in its growth. Last year witnessed the 4 piece thunder its way through North America, wowing fans on the first leg of its Evolve World Tour which started in Phoenix, Arizona and is scheduled to conclude in Kiev later this year.

This opening stage of the global outing, in support of the band’s third studio album Evolve, comprised 31 North American dates and SRae Productions. Owned and operated by Sooner Routhier and Robert Long, a trio of Green Hippo Hippotizer Boreal Media Servers were used to control an array of 30 LED pods. Mounting the pods on a brace of automated Axis, the SRae team used 4 projectors to shoot on to physical roll drop units.

The 3 Green Hippo Hippotizer Boreals – 2 active, 1 acting as back-up – received location data via PSN information fed from Raynok Automation software. Here, Green Hippo’s Shape proved invaluable. “We really enjoy the SHAPE function of Hippotizer, which quickly aligns and builds the show while utilising multi controller to accept and manage different pieces of information coming into the system. The ability to quickly adjust the SHAPE file while the system is online, and then sending the new file into the system is really handy for live implementation” said Matt Geasey, Technical Director of SRae

SRae’s Green Hippo machines at the Imagine Dragons gigs were running the latest version of Hippotizer V4, and Matt praised not only the software, including its Colour Blocks function, but also the ‘human support’ provided by Green Hippo itself: “One of our favourite features of V4 is the colour block function in the viewports. We were able to successfully build smooth fades and change the layouts of the blocks, fast, when needed to create different dynamic looks, when the automated pods were in different configurations. I choose Hippotizer because of the support it has behind it. The special projects team, who were involved on this project once we confirmed the design, really helped make the system work when changes were happening during the process. Good team right there” said Geasey.