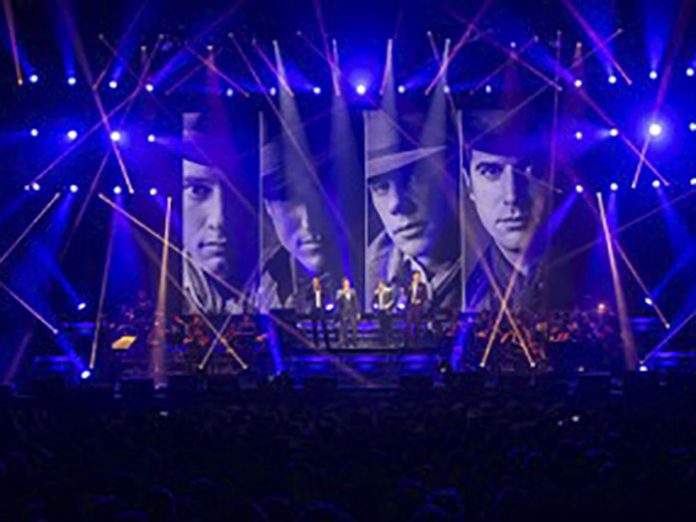 Il Divo have commenced on their ‘Amor & Pasión’ tour and wanted an extravagant lighting design to match their unique Latin-influenced performances.

The design was based on using pre-rigged trussing which kept the load-ins and outs to a sensible time frame. There are six diagonally hung side trusses, three per side beneath one another, and three overheads (front, middle and back).

“The design concept was to frame the large upstage LED screen with lighting fixtures in a way that widened the vista, formed layered looks to create depth in the picture with the LED screen as a moving theatrical backdrop within that picture,” Dan Tiley, Lighting Director, explained.

The new presentation with the dancers required a front truss, something Tiley has not used on previous Il Divo tours, which includes 12 of the 19 MAC Viper DX Washes.

20 Martin By Harman Viper Profiles are in action on this version of the rig, four of which are for exclusive backlighting, highlighting the four singers with the rest used for beam work. Robe Pointes are used for effects with 12 on the deck and 18 in the air on the top truss and lower side trusses to produce low ACL style looks.

The large quantity of Aura XBs are used to create grids of lights either side of the stage with a long line across the top side truss and another line across the floor at the back. “They’re so bright that you don’t really need a large wash any more when pointing towards the audience, and six fit into a really small neat box,” commented Tiley.

The narrow beam of the Aura XBs helped extend the stage and there are more XBs inserted beneath the open tread stairs to remove the black holes in the set design. Also on the floor are two rows of Philips Showline eStrip LED battens positioned on the back of the orchestra, lighting the backdrop area to create silhouettes of those playing.

For lighting the orchestra, Tiley wanted a specific feature for the job which was the Vari-Lite VL1000 TSs. Four were placed on the front truss and four on the mid which generated the glow that separated the orchestra from the rest of the stage.

Five 4-lite molefays were used on the front truss to highlight the audience with a further 18 2-lites as effects adding another texture of light to contrast with the LED and HMI sources.

Atmosphere is vital to Il Divo’s performance and Tiley captured the audience’s engagement with the installation of four DF50 machines each with an AF1 fan. These created a consistent, long lingering haze, which was perfect for the type of show on offer. All the lighting was controlled via the new grandMA2 full size with a light running as backup.

“It’s been a fantastic tour right through, the production and aesthetics have been really successful,” Tiley concluded. “Working with HSL as always has been brilliant, especially the fact that they were prepared to invest in the new kit and ensure I had exactly what I needed.”