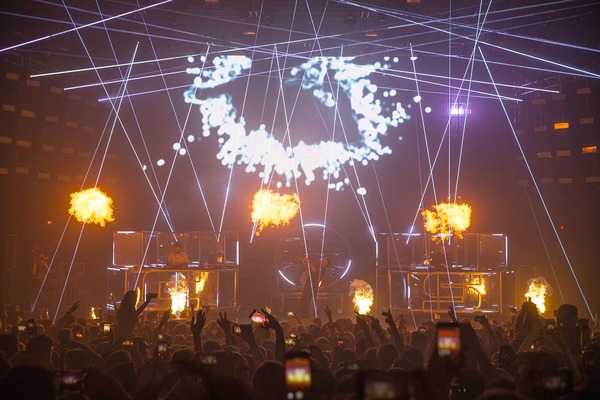 The lighting equipment and crew was supplied by Blackburn-based HSL. Hurst took the base elements of this show from the design he originated for the band’s headline set at Lovebox Festival, which featured a specials package from HSL, which was re-scaled and re-worked to fit the Academy’s stage.

Robe BMFL Blade moving lights were positioned upstage of the set, so Hurst could project gobos onto the Perspex set panels, which also looked highly effective and helped enhance the depth and perceived size of the performance space.

A dozen Robe LEDWash 1200s were positioned downstage left and right and used for powerful cross stage washes. The band – live sets also include the rambunctious MC Rage – are not fond of front lighting, they prefer to be caught in the more interesting shadows and crossfire of Andy’s ‘bigger picture’.

The major architectural look of the show was 137 SGM Q-7 LED strobe / floods produced some spectacular looks, while Q-7s were arranged on drop bars, 8 rows deep behind the screen and 4 rows deep to the sides. Additional Q-7 fixtures were utilised as floods.

In the overhead rig, Robe LEDBeam 100s and Claypaky Sharpies dotted over the trusses were used for panning out into the crowds and sweeping the audience back up into the action. The lighting picture was completed with 3 Robe DLX LED Spots on the front truss used for key lighting the 3 band members.

A total of 20 ER Productions Kinects were deployed on the side trusses and the floor, and worked harmoniously with the lighting. “Laser technology has moved on significantly in recent years as well as becoming highly cost effective” Hurst explained.

Andy praised his “fantastic HSL crew” who worked tirelessly to get everything up and running in time. They were crew chiefed by Matt Brown and included Keith Parrot, Joe Downling and Bobby Swerdlow. The project was managed for HSL in the office / warehouse by Jordon Hanson.