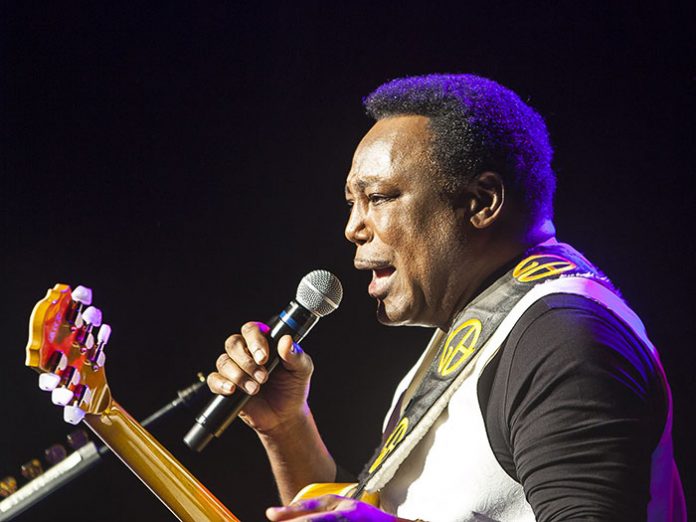 It was the first year that HSL has supplied the tour, working to a lighting design and spec created by UK based LD Simon Tutchener, who has also lit the last four UK tours. This one was project-managed on the road for HSL by Lester Cobrin, and prepped and overseen in HSL’s Blackburn HQ by Sean McGlone.

Benson had a six-piece backing band and Simon put together an appropriately clean and straightforward lighting design to suit the delivery of the show. The biggest challenge in lighting the show is that there was no predefined set list, so anything could come up next and the show was primarily improvised in terms of lighting cues. Michael Briggs also mixed the FOH sound and was in the same situation of not knowing exactly what might come next. Ian Stevens tech’d and looked after all the HSL kit with Simon as a working LD.

Simon’s design utilised two trusses and was designed to fit into all the venues, which were mainly concert halls. At Benson’s sell-out Royal Albert Hall performance, they took advantage of the venue’s organ LED lighting package so this was fired up and effectively became the backdrop for the show.

Simon’s console of choice – as always – was an MA grandMA2 and the moving lights were Martin MAC Viper Performances, chosen for their power and flexibility, and the fact you can get so much out of them. They worked hard throughout the show.

They were joined by MAC 2KXB washes on the back and front trusses and MAC Aura XB4s on the floor. 4-liteMoles were deployed on the front truss for the audience lighting and ETC Source Four profiles with 19° lenses were used to picked out the band and take care of the key lighting. Another Source Four Zoom with a custom gobo of the George Benson logo was focused on the fore-stage for the walk-in.

It was the first time Simon had worked with HSL as a supplier and commented, “The kit has been great, Ian was a real pleasure to work with and HSL has been very quick to react to anything we might have needed.”