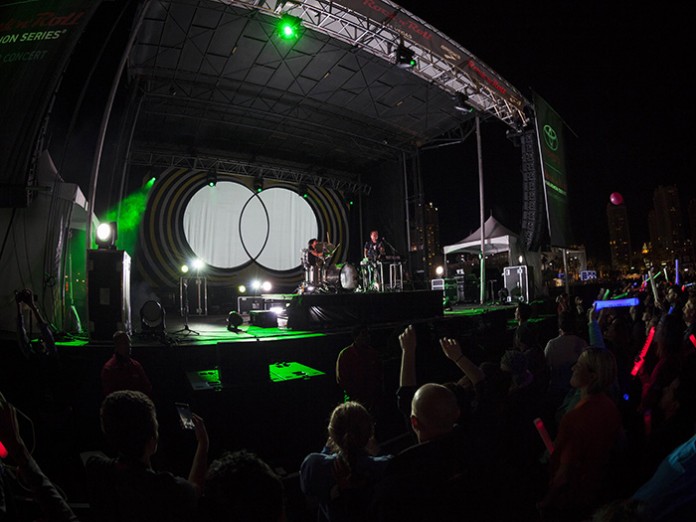 The first Rock ‘n’ Roll Marathon took place in 1998 as a simple race with bands along the course to celebrate and inspire each participant. It has since grown to 30,000 participants running in dozens of cities across the country, with the race in Las Vegas recognised as the signature event.

For the third year in a row, AV Vegas relied on HARMAN’s JBL VTX line arrays and Crown I-Tech HD amplifiers for the event’s sound reinforcement system, and Martin by HARMAN fixtures for the lighting production.

During the Las Vegas Rock ‘n’ Roll Marathon, Las Vegas Boulevard was closed to all traffic and turned into a brilliantly lit running track. Runners passed more than two dozen stages with live bands and DJs, whose infectious songs and beats inspired them to the finish line.

This year, headlining performers included Kid Rock and Matt and Kim. While entertainment and the energy of a festival weekend define the Rock ‘n’ Roll Marathon experience, runners have also raised more than $300 million for participating charities since its inception.
AV Vegas Concert Sound and Lighting has been the marathon’s chief audio and lighting provider for three years. This year, the company brought in new JBL VTX V20 line arrays powered by Crown VRacks as well as JBL CSR-82L Custom Shop subwoofers for the start line.

The crew also installed pairs of truss-mounted JBL VRX932LA Constant Curvature loudspeakers every 200 feet down the boulevard. The VTX system, accompanied by the delays, served to pump up the runners before the start of the race.

John Hansen, Founder of AV Vegas, said the addition of the JBL VTX V20 line arrays was a critical improvement. “The V20s are a huge step forward for us. They are really stout, and with the limiting that is built into the Crowns, you don’t really have to worry how hard you push.”

After the Las Vegas Strip closed at 2pm on race day, Hansen and his team set up a stage in the middle of Las Vegas Boulevard in the shadow of the Paris Las Vegas hotel. Hansen selected four JBL SRX 835P loudspeakers on four JBL SRX 818SP subwoofers for the main system and six JBL SRX 812P wedges for on-stage monitors.

He commented: “The system set-up time was minimal, since they are powered loudspeakers, sound really good right out of the box and require very little tweaking.”

Further down the Las Vegas Strip, AV Vegas built towers of JBL loudspeakers lining the runners’ route. This ‘Mile of Music’ concept has been in place for three years and has proved an enormous success. The AV Vegas staging department built four six ft tall platforms and placed them 500 feet apart on the Las Vegas Strip. Hansen and his team installed a pair of ground-stacked JBL VTX V25 loudspeakers facing north and another pair facing south on each platform, with antennas sending the audio signal wirelessly.

He commented: “We chose the VTX V25 loudspeakers because they had enough low end that they did not require subs to sound convincing. Not laying down subs cut down on set-up time and truck space considerably.

“Those things become really important when your crew is setting up 16 stages of audio and lighting equipment all over town in a very short time.”

He added: “The colour mix on the Martin MAC Viper Profiles is fantastic. It’s smooth with really nice pastels. The originality of the designs of the gobo wheels help make the light show that much more creatively charged, providing a great display for the runners.”

Hansen has been using HARMAN Professional Solutions products for many years and says the reliability of each of the company’s products offers him enormous peace of mind.

He concluded: “There are always hurdles when it comes to this event. There are so many different things to coordinate, and I’m often caught worrying that we might not pull it off. Not having to worry about any of the HARMAN Professional Solutions gear is invaluable and a big reason why I keep returning to these products, year after year.”