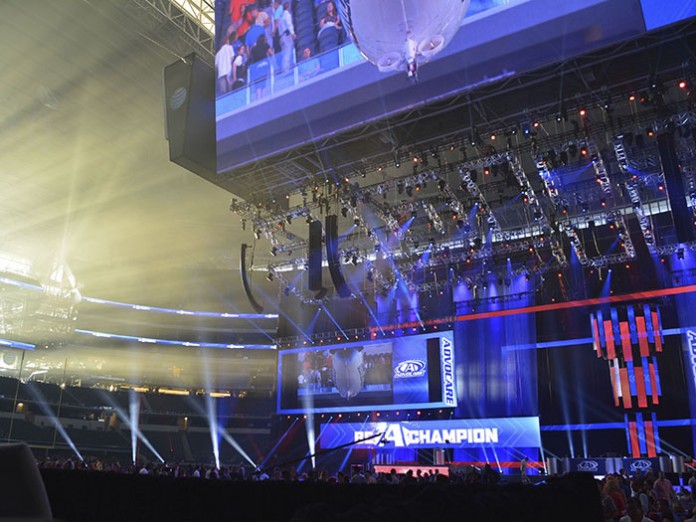 Edward Gonzalez, Director of Audio Services for Multi Image Group, said: “As corporate events go, it doesn’t get any bigger than this. The setup was elaborate, with a stage that went lengthwise across the entire stadium floor with a raised platform, multiple large video screens and a sound and lighting truss that spanned the entire stage. It even had pyrotechnics that were launched from each side.”

Multi Image Group provided a total of 96 JBL VTX V20 line array loudspeakers, arranged in four hangs of 24 each, plus two hangs of 10 VTX S25 subwoofers and a row of 12 G28 ground-stacked subwoofers.

The venue’s size presented challenges. Home of the Dallas Cowboys, AT&T Stadium is one of the largest in the world, a fact Gonzalez and his crew had to keep in mind throughout the configuration and installation.

Gonzalez said: “The reverb times are massive. We had to deliver concert-level SPL without everything turning into a washed-out blur, and the VTX line arrays worked perfectly.

“They deliver broad, yet focused, precise and stable horizontal coverage over long distances without exciting the reflective surfaces that could create excessive reverb.”

Gonzalez said there were practical advantages to using the VTX line arrays and subs, primarily the ease and speed with which the equipment can be moved, set up and dismantled: “I didn’t have a lot of truck space do to this show, and the VTX enclosures pack a lot of punch for such compact boxes.

“Also, we were able to put the system up in a relatively short time, and we literally brought the whole rig down in 45 minutes at the end of the event.”

Crown I-Tech HD 4x3500HD amplifiers powered the V20 loudspeakers and S25 subwoofers, with I-Tech 12000HD amps driving the G28 subs. The crossover point for the ground-stacked G28 subs was set at 60Hz and the flown S25 subs were running from 120Hz to 60Hz.

Gonzalez set up the S25 subs in cardioid configuration, which he said helped clean up low-frequency issues as well. To configure the system he used JBL HiQnet Performance Manager.

He concluded: “The ability to precisely control the VTX system and the built-in pre-set tunings and flexible DSP of the Crown amps were huge advantages for this event. The VTX system worked wonderfully in a challenging acoustic environment, and the coverage was really outstanding.”