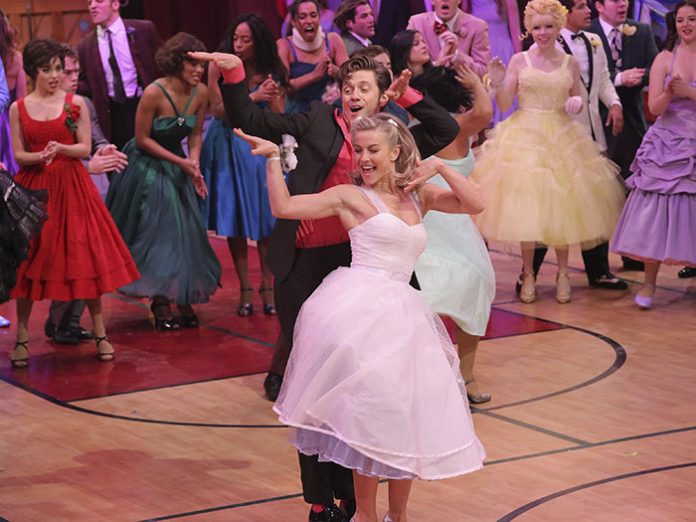 Audio Supervisor / Designer Bruce Arledge selected DPA Microphones for the television adaptation of the musical aired on FOX. Brought on by Producer Greg Sills and Production Mixer Mark King, Arledge was confident that the DPA mics would catch every syllable, both spoken and sung.

Shooting on four stages at Warner Bros. Studios and outfitting multiple performers, Arledge needed microphones that would complement the unique sound setup, while still delivering unwavering audio quality. He chose 50 of DPA’s d:screet 4061 Omnidirectional Microphones due to their adaptability and ease of use in unusual miking applications.

“My audio assistants worked directly with the teams in wardrobe, hair and makeup to find an optimum place underneath the wigs to integrate the mics,” said Arledge, who designs and supervises award shows and live TV broadcasts along the West Coast. “We did a lot of colouring and painting on the mics to match hair tones. Throughout this process, the sound quality captured by the d:screet 4061s remained flawless. During live performances, it is important to incorporate the mics as seamlessly as possible, even through multiple wig changes, and with the DPA mics I was able to do that.”

The d:screet 4061 Omnidirectional Microphone is specifically designed for use with wireless systems in theatre, television and close-miked instrument applications. It is conveniently unobtrusive and exhibits surprisingly accurate omnidirectional patterns with its small size.

Grease: Live had several quick transitions between dialog and vocal performances. The same DPA mics were used throughout the entire production. “It was a hybrid production, where a lot of the scenes shift between dialogue and music,” said Alredge. “The DPAs functioned perfectly and seamlessly adapted with the performers.”

The moisture-resistant microphones performed as flawlessly as the cast throughout the entire 180-minute show. “Rain was also an unfortunate factor that day because we were running between inside and outside sound stages,” continued Arledge. “The mics didn’t miss a beat. Even through the sweat from the actors and the precipitation that day, the d:screet 4061s played their part and provided exceptional audio quality.”

Another key reason Arledge chose DPA was due to its consistency when using multiple units. He elaborated: “We had 50 wireless microphones active at once and I needed the sound for each one to match up. All the 4061s sounded the same, which was extremely important during a production of that size.”

Arledge brought in Dave Bellamy, Majority Partner of Soundtronics Wireless, to provide RF design, technical support and coordination throughout the entire production. “When Bruce brought me on board I was thrilled to be involved,” said Bellamy. “We are also big fans of DPA. They are our go-to microphones for Broadway type shows and are widely sought after throughout the industry. DPA helps us make our customers happy and when they are happy, I’m happy.”