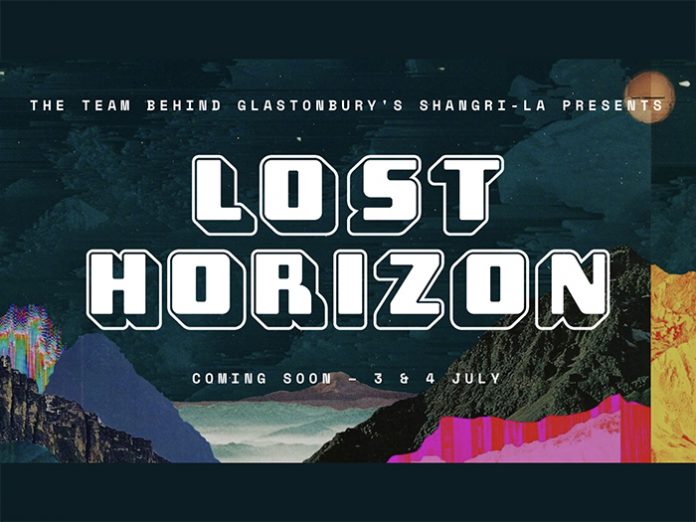 The team behind Glastonbury’s legendary Shangri-La, in partnership with VRJAM and Sansar, has announced the arrival of Lost Horizon (3 and 4 July 2020), the world’s largest music and arts festival in virtual reality.

The festival, in collaboration with Orca Sound Project and Beatport, features an interstellar line up of superstar DJs, underground acts and visual artists, raising money for The Big Issue and Amnesty International.

Lost Horizon is a fully interactive and multi-stage event to explore via PC, VR or mobile app (iOS and Android) and streamed live and direct to wherever you are on the planet via Beatport and Twitch, and via partner and artist Facebook, YouTube and Twitch accounts. The festival is a deep multi-layered experience, filled with wild dance-floors, secret headliners, a visual feast of art and performance, hidden venues and huge artists.

SHITV (Shangri-La International Television) broadcasts everything from the absurd to the enlightened, from the sidelines, frontlines and backstages of alternative culture. SHITV will show films, documentaries, theatre, live art, comedy, animation and talks including Sofia Olins ‘Lost in Vagueness’ the extraordinary untold story of Glastonbury Festival’s most iconic and anarchic sideshow attraction, Lost Vagueness.

New for 2020, the Nomad stage has been created for the 30th Anniversary of the Traveller’s field that came before Shangri-La, the heart of the free party movement. The new stage will feature artists from 24hr Garage Girls, Amen4Tekno Records, Born on Road, Critical Records, Hospitality, Hold Tight Records, Kaotic Kartel, Run Tings Records, UnCommon Records.

Lost Horizon is a virtual and mixed-reality festival event unlike any other featuring computer-generated avatars and green screen ‘hologram’ performances. Lost Horizon is created using Sansar, Wookey Technologies’ cutting-edge, photorealistic platform for virtual live events and can be experienced on PC, VR or mobile (iOS and Android), plus will be streamed live on Beatport, Twitch and across social media.

Lost Horizon mirrors Shangr-La’s huge outdoor art gallery, and in addition to the incredible music line up, will feature over 200 visual art pieces, curated by ShangrilART on the ongoing theme of human connection.

With its roots deep in contemporary music, art and activism, Shangri-La has established itself as a legendary field in UK festival culture, engaging a truly dynamic community of artists, builders, and revolutionary creators and known for showcasing  the latest “off mainstage” acts, Shangri-La has served as a launchpad for some of music’s biggest names, with artists such as Lady Gaga, Rudimental, Disclosure and Pendulum gracing its stages early in their careers. This makes Lost Horizon the perfect place to launch the next era of live music.

Lost Horizon is the Shangri-La team’s response to the pandemic affecting the planet, and raises funds for The Big Issue and Amnesty International. The Big Issue’s urgent appeal has been launched by the organisation to support Big Issue vendors who haven’t been able to sell the magazine safely on the streets since the Covid crisis hit.

Amnesty International* is responding to the Coronavirus pandemic as a human rights crisis in the most immediate sense, its usual work continues and now it is also working to ensure emergency laws protect the most vulnerable, such as people living in poverty, with disabilities or with violent partners.

Kaye Dunnings, Creative Director, commented: “Shangri-La has brought many world firsts since its creation in 2008, from the first to use video mapping in a festival environment and an immersive storyline, to the first womxn only space or Heavy Metal area at a mainstream festival, incorporating creativity at its core and as a direct response to the world we live in. Our mission is to pioneer new ways of sharing culture and creating a global community that we feel defines us and our ethos.”

Dunnings added: “We need unity more than ever right now, in an industry that is falling away in front of us. By creating a digital platform to experience art and music in a new way, we are at the forefront of defining the next generation of live entertainment and creative communities as we know them.”

Sheri Bryant, President of Sansar, commented: “Now more than ever, fans are looking beyond traditional live shows to connect with the artists they love. They’re online, they’re savvy about streaming, they’re eager to experience music unconstrained by where they live, and there’s a clear demand for events that transcend old boundaries.”

Bryant continued: “With Shangri-La presents: Lost Horizon, we’re delivering the music festival of the future: deeply immersive, fully online, accessible to anyone and anywhere with a PC or phone at their disposal. Shangri-La presents: Lost Horizon exists at the vanguard of something truly incredible, and we couldn’t be more excited to turn this page. The future of live events is virtual and we’re incredibly excited to be bringing it to fruition.”

Tickets to experience Lost Horizon in VR orPC desktop are available now at www.sansar.com/losthorizon. Fans can also sign up for the free Lost Horizon mobile app that will empower them to see inside the virtual world of Lost Horizon using nothing more than their phone, by subscribing at www.losthorizonfestival.com