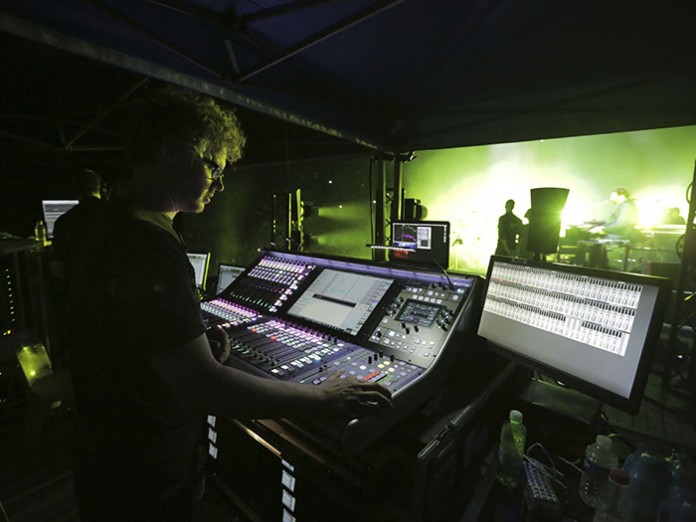 Dave Gilmour’s 2015 world tour started in the UK in September and will continue until a show at New York’s Madison Square Garden in April 2016.

The guitarist and vocalist had already impressed fans and critics, drawing on nearly 50 years of Pink Floyd and solo work, with a prominent place reserved for his latest album, Rattle That Lock. Gavin Tempany was the Monitor Engineer on the tour and he had chosen an SSL L500 Plus console. He commented on his choice: “I had the choice of a couple of consoles but they were the only ones that would do the number of ins and outs I needed. I ended up using 186 wet audio paths, and 32 dry, so it was pretty hectic.”

He noted: “Most of the band use wedges. The technicians are on in-ears and some of the musicians at some point have in-ears as well; that’s for certain songs where they need a click track and that kind of thing. That’s why there are so many outputs, because a lot of it gets doubled up.” As well as the high channel count, Tempany said that sound quality and reliability, and the ability to make changes without loss of audio, were all big factors in his console choice for such an important tour.

He commented: “There’s something amazing about the sound of this console. I’ve described it before as ‘robust’. It just has a ‘solidity’ about it. It sounds very ‘fast’ and solid. When you push the fader up you say ‘Huh – how does that sound so good?’ Some other consoles do 96kHz as well, but this one has something about it that’s very clean. If you start from that place you can always dirty it up. It’s very hard to clean something up if it’s already dirty. For me, this equates to more gain before feedback, because it’s more stable and solid. What you put in is what you get out.”

The L500 does not mute audio while the operator changes its architecture. This was particularly valuable to Tempany, especially during such a long and hectic rehearsal schedule. He stated: “On this gig, with so many ins and so many outs, there is always someone asking you for something every 30 seconds. If every time I want to change something I have to say ‘hang on a minute guys’, it just doesn’t make you look good. “With the L500, from when I turn up at nine o’clock in the morning on a rehearsal day until 7pm I never lose audio; that’s unreal. You can mess with the DSP, do whatever you like, you just never lose audio.”