Gil Teichman is one of the most flamboyant figures on the Israeli lighting design and production scene – innovative, creative, sometimes controversial, uncompromisingly ‘hands-on’ in every design job.

He is also a regular investor in Robe products.

His eponymously named company, “Gil Teichman”, purchased their first Robes some years ago, and in fact he’s known of Robe right since the start in the 1990s, when they were an OEM manufacturer. The first ever “Gil Teichman” purchases were of the ColorWash and ColorSpot 1200 series, around nine years ago, followed by the 700E AT series, all delivered through Robe’s Israeli distributor, Danor Theatre & Studio Systems.

Well-connected at all levels of business including the government, as an ‘ideas man’ Teichman relishes initiating and delivering new, original and the most challenging and inventive lighting projects. He has a way of getting all the right people on-board to realise pretty much any project, all adding to the myth surrounding the distinctive yellow company logo.

The company was founded in 1990. It now employs around 150 people and has a 2000 square metre warehouse in Pardes Hana, a 40 minute drive up Highway 2 north from Tel Aviv.

The offices and the creative hub are at “Gil Teichman” HQ in the bustling Tel Aviv suburb of Herzliea.

A raft of project managers deal with the day-to-day business which services a wide variety of corporate, commercial and industrial clients, delivering lighting to around 1000 shows and events a year of different sizes, budgets, profiles and complexities.

There is also a division just concentrating on international work for high-end corporate clients.

A great relationship with Danor has maintained “Gil Teichman” as one of the distributor’s largest customers for Robe, and the upgrade to the moving light stock started three years ago. This now includes some 24 MMX Spots, 12 LEDWash 1200’s, 24 LEDWash 600’s, and was followed up in summer 2015 with the purchase of 18 Pointes. Both Teichman and “Gil Teichman” are among the biggest cross rental clients in the country.

Israel – a small country with a very proactive arts, cultural, performance and commercial event industry – is one of the markets where it is a huge benefit for the local distributor to also have a hire division of the latest technology to support its clients.

Robe represents 90% of Gil Teichman’s moving light stock, and most of their projects involve Robe lights.

A lot of Teichman’s personal design work is for government sponsored projects, city lighting schemes and public events like the 60th Independence Day celebrations. He’s known for ‘pushing the envelope’ of imagination and creativity, often testing all working alongside him but producing stunning results.

Teichman utilised over 200 Robe fixtures for the opening ceremony of the new Hall 2 at the Tel Aviv Exhibition Centre.

Other notable recent projects have included illuminating the 158 metre high Kirya Tower – the sixth tallest building in Israel – achieved using 24 LEDWash 1200’s spread out around the base, their powerful beams shooting up the postmodern glass, granite and aluminium clad tower, transforming it into a rich glowing red beacon to commemorate the 20th anniversary of the assignation of Prime Minister Yitzhak Rabin in November 1995.

Another plan activated by Teichman – via the Council of Jerusalem – was the illumination of the elegant Chords Bridge at the entrance to the city.

Designed by Spanish architect and engineer Santiago Calatrava, the single 118-metre mast supports the road span via 66 steel cables arranged in a stylish parabolic shape, making it one of the city’s defining visual features.

It is used by Jerusalem’s light railway and has an adjoining glass sided pedestrian walkway. Teichman pitched the idea to the City of Jerusalem Council they went for it, with him as the lead light artist.

Teichman has a complete passion – close to obsession – for lighting and his work.

Once he gets into his stride, recalling project after project you can become mesmerised with amazing stories – Ramagatan Zoo; ‘taster’ illuminations for the Tel Aviv to Jerusalem tunnel – due to complete in 2016, the more industrial and challenging, the more energised he becomes.

Lighting the 250 metre high chimneys of the imposing Orot Rabin Power Station in Hadera was another one – the majestic chimneys were beautifully lit and textured with nine BMFL Spots positioned 400 ft away the occasion was for a music festival staged in the adjacent park.

“BMFLs were the only fixture bright enough to get the results I wanted,” he declared.

Teichman has invested in Robe products for a number of different reasons including the quality, brightness and reliability “all of which adds up to the best value right now” he stated, adding “Our Robe fixtures are the hardest working in Israel”.

Teichman – also a master of ambient brand exposure – enthusiastically seizes opportunities to market and push the company name, logo and reputation forward. The “Gil Teichman” striking yellow branding and logo can frequently be spotted on TV and various internet video footage through the strategic parking of trucks.

If you asked the average person on the street in Israel if they knew anything about ‘entertainment lighting’ there’s a good chance they would say “Gil Teichman!” 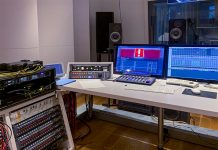 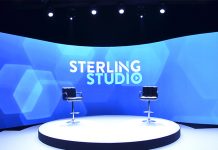