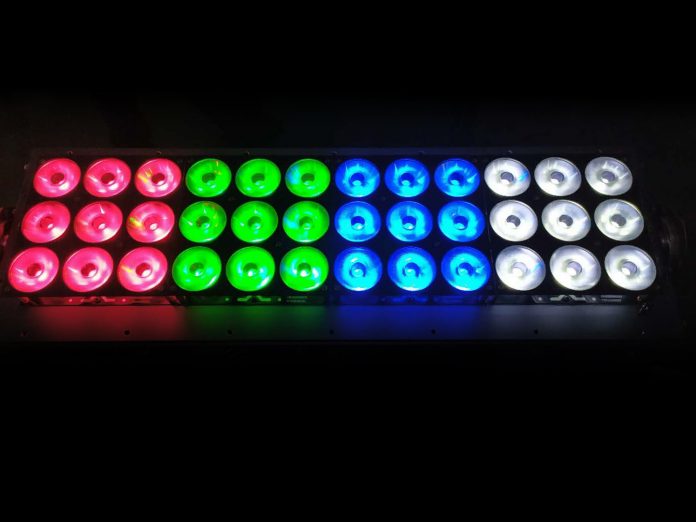 Once again the company’s innovations will be in keeping with the modern requirement in theatre and show lighting, as well as the architectural segment.

Featuring four framing blades, it delivers a range of graphics in different sizes and shapes and a further four framing blades to give a full curtain effect. The whole module offers endless rotation to provide unlimited versatility — a major breakthrough.

Also featured is a double layer effects wheel, with independent bidirectional rotation at variable speeds, and a vari-speed shaking effect. Other effects include a motorised linear focus zoom, while the iris is also linearly adjustable from 5-100%.

Alongside, will be the new LS PAR 354 (PR-6209A) fixture is an IP67-rated par light for external use. Equipped with 54 x 3W LEDs, it provides RGBW (with amber and lime options) as well as single colour output to deliver countless mixing effects and combinations.

This makes it ideal for multi-scale outdoor stages, theme parks and so on. Included in the comprehensive feature-set are electronic linear dimming from 0-100% and electronic strobe, from 0.5-33fps. It also offers variable beam angles (half peak)9°, with options of 7°, 10°, 20° and 40°). Other functions include Lamp board and fixture usage time display; DMX channel mode and setting display, and LCD menu display (backlight automatically turns off after a delay). Control mode and other information can be transmitted via synchronisation. Housed in a high tensile, cast aluminium IP67-rated alloy chassis, the weight of the LS PAR 354 is just 10kg.

Emitting a 37° x 57° near square light it is multi-faceted and is ideal for use in medium to large scale stadia, theme parks and for general architectural lighting. In terms of movement, the head tilts at 180°, and in addition to the field angle, the beam angle is 14°. These will line up alongside other popular fixtures in the PR Lighting catalogue.