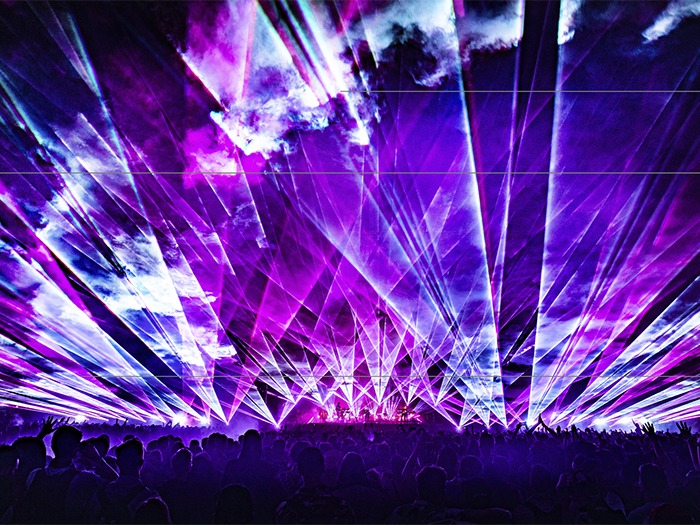 What sparked your interest in the events sector?

“I have always had an interest in the technical side of live entertainment – the school disco lighting rig had my attention more than the cheesy music being played. Having had to ‘act’ in school for drama class, I realised quickly my preference was being on the other end of the multicore or backstage. After working for a few local school theatre productions, I discovered a creative outlet in lighting design, programming and operation – I recall spending many hours programming a Zero88 FatFrog.”

How did you get your start in the world of lasers?

“I had my first exposure to lasers while working at Ministry of Sound nightclub in London. We owned two Martin 1.6W lasers, which I started to learn to use and maintain, as well as the safety associated with them. After four years, I discovered what was then a small three-person operation called ER Productions and the rest, as they say, is history…”

What was your first role in the company?

“I was a laser technician, with probably the craziest first day ever in a job. Upon arrival, I loaded up a Ford Transit packed to the max with equipment, was given a plastic folder with documents at lunchtime and began the drive to Ibiza for an eight-month posting – learning programming and operating lasers, mastering load-ins and load outs.”

What are the differences between the US and UK market from a special effects and lasers perspective?

“The sheer size of the USA and logistics is interesting to master. For example, when we ship something to Italy, it gets there quicker than a coast-to-coast shipment in the USA. There are great people working in this industry on both sides of the pond; with such an international business we work in, I was quick to adapt and embrace the differences.”

What are the favourite shows that you’ve worked on?

“Zayn Malik’s Like I Would music video, America’s Got Talent, Calvin Harris’ 2017 Tour and Coachella set, as well as helping set a Guinness World Record at LDI 2017 by pixel-mapping 317 lasers.”

What are some of the most exciting developments in the special effects sector?

“Laser and diode technology have come on significantly; units are now smaller, lighter and consume less power. This has opened doors for designers to put lasers where we previously would never have thought possible. The reliability of equipment has made shows easier. At ER, we’re always developing new effects products, with a dedicated team working solely on bringing our ideas from paper to life, ready to go onto the next show.”