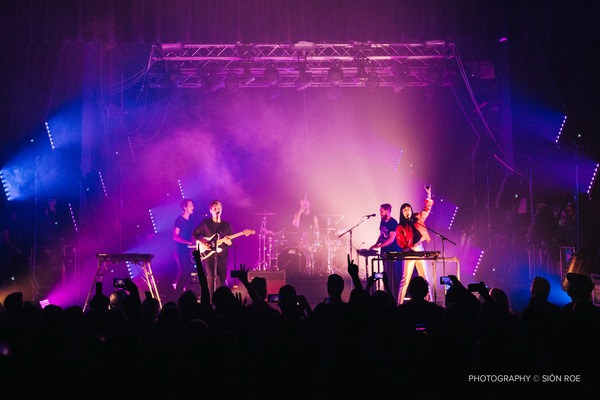 New Zealand electronic act, The Naked And Famous visited London in October 2017 at the end of a successful festival season, supplied in their lighting and equipment departments by Entec, for a special show at the 1,700-capacity Electric Brixton.

Liam Griffiths of Stage Techniques has been the band’s lighting designer since they emerged from Auckland with their first major single Young Blood in 2010. “I went out on a European tour with them that year and we all hit it off from the start,” said Griffiths. “I’ve been doing it ever since. They’re a fantastic band to light.”

Earlier this year, T/N/A/F singer Alisa Xayalith, Thom Powers, Aaron Short, David Beadle and Jesse Wood toured North America with Griffiths, prior to the LD ‘jumping off the bus’ to work alongside Clean Bandit during summer 2017.

Featuring hits Higher, Punching In A Dream, Hearts Like Ours and I Kill Giants, T/N/A/F’s show at the home of former rave palace The Fridge saw Griffiths base his design around visual references to their most recent album, 2016’s Simple Forms. Piloting an Entec-supplied grandMA2 light console with an onPC command wing, the LD specified 24 Ayrton MagicBlade-FX and 15 TMB Solaris Flare Q+ 36° units, which are among some of the west London rental company’s latest inventory acquisitions.

Griffiths commented: “I had been using the new Flares on Clean Bandit throughout this year and I was immediately impressed with the evenness of the field of light they provide and how incredibly bright they are [the Q+ is capable of an astounding 52,000 Lumens]. Consequently, I never run them at anywhere near 100%. They were particularly good in the case of T/N/A/F for silhouetting upstage and also as side washes as an alternative to relying on front trusses.

“The MagicBlade-FX is the version that comes equipped with a 15:1 optical zoom system and, again, I was very happy with the performance and the variety of looks that can be achieved with them. These were the fixtures clamped on to the uprights [Tomcat 12” tower trusses] that were raked backwards to provide more depth, giving the impression of the lights leaning away from the stage. It was a neat, chequered effect with a variety of patterns that I created through the permutations of the LED sources,” he added.

In terms of colour, Griffiths favoured blue and red gradient atmospherics from Robe LEDWash 600s, notably to highlight the artists’ faces, while the band’s promotional videos provided source material for effects. “I was feeding low-res video content into the MA2 and the whole show was bitmapped rather than relying on the console’s effects generator that everyone seems to go for, and that seemed to work really well.”

Entec was represented at the show by lighting technician Will Wright. “For a single show, it was a lot of work but it all went very smoothly, thanks to Entec. Everything was in good shape and Will knows his job inside out, so it was a pleasure having him there,” he concluded.