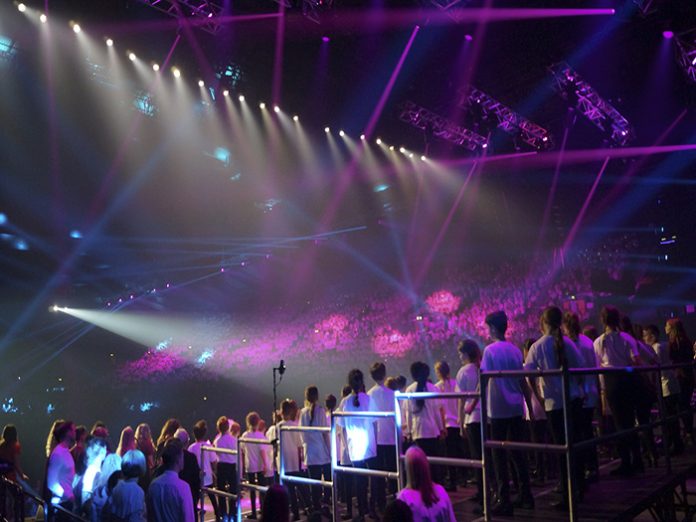 Described as the “world’s most sensational school concert”, the Voice in a Million charity concert drew a remarkable 10,000 schoolchildren to London’s SSE Wembley Arena in mid-March 2018, for 2 nights of performances by the UK’s most gifted children’s choirs.

With technical production on a tight timescale, an Electro-Voice X2 line array system, part of the X-Line Advance family, delivered punchy, even coverage across the arena, while Electro-Voice ND86 dynamic supercardioid vocal microphones ensured each child’s voice was captured in perfect detail.

Founded in 2006 by Robert and Jo Garofalo, Voice in a Million is a charitable organisation dedicated to helping children who have been orphaned, abandoned or separated from their families at birth. Handling technical production for this year’s event was Birmingham-based DMX Productions, whose Managing Director, SJ Grevett, looked to FOH Engineer Neal Allen for the ideal audio solution.

They found it in the shape of an impressive 42-element Electro-Voice X2 line array system comprising left-right hangs of 15 X2-212/90 and X2-212/120 line array elements per side plus side-fills of six X2-212/90 per side. A further eight Electro-Voice XLE181 elements were deployed as in-fills; 18 Electro-Voice X12-128 dual 18-inch subwoofers provided ample low-end extension.

“The X2 gave us a better overall sound and more power than the previous system,” said Allen. “Though my faders were at 3 dB less output, the entire show benefitted from greater clarity – especially in the mid-high frequencies,” The concert’s charitable status also meant that time was limited: “We had limited local crew, but even with that challenge, we were in and out of the venue in two hours and 10 minutes.”

Finally, the use of Electro-Voice ND86 dynamic supercardioid microphones meant the front of the signal chain was every bit as impressive as the end. “We needed a microphone with the characteristics of a condenser but the controllability of a dynamic – that’s why I wanted the EV ND86 mics,” Allen explained.

SJ Grevett, of DMX Productions, was equally pleased: “The system gave us greater clarity – a feature that was of paramount importance as for most of the children performing this was their first time singing live on the Wembley stage.”