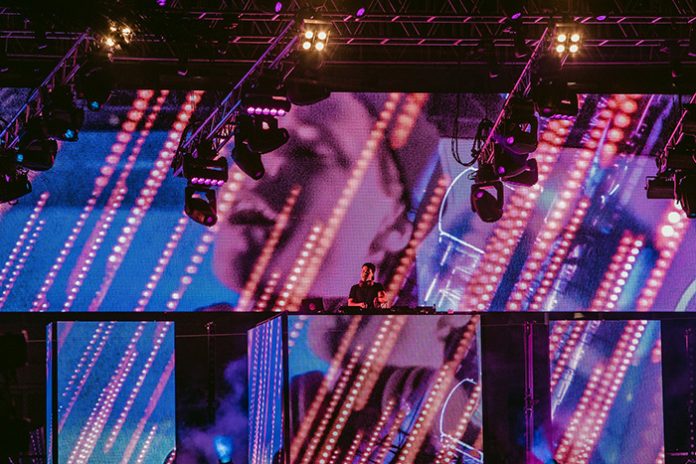 Lighting Director and Production Designer Tyler Frank and the team at Everlast Productions created a memorable experience for Fontainebleau and their guests for its 2017 New Years celebrations. By blending a creative solution with innovative technology and technical expertise, Everlast produced an engaging live event experience.

“Each year we try to bring something new to the table,” Frank said, explaining that the venue gives very little compromise for the structure. They had to build a tour-grade stage over an existing pool-side bar with the dance floor taking up a third of the famous bow-tie pool. Frank’s team spent 6 days of overnight installs in order to not interfere with the pool’s operations during the day.

Lighting for the event had to abide by a few rules. Every fixture in the rig was designed to have multiple purposes throughout the show. When some fixtures were lighting the band, others would bounce out into the house and vice versa. Fixtures had to be reliable and be able to withstand the extreme weather conditions that can be found in South Florida. The last requirement was light output. “I was competing with LED tiles and outdoor ambient light that I had no control over,” Frank explained. “I needed fixtures that could punch through the noise and still read well on camera. The overall parameters of the show were intended to light a 5-person band with a VIP DJ. From there we came up with concepts for creating dynamic looks and verticality in the design. Once the artists, Demi Lovato and Kygo, were confirmed we tweaked the canvas to better fit their branding and rider requirements.”

Frank said the Platinum 5R Beam Extreme is one of his favorite lights to use outdoors. He used 48 beam fixtures in total, some on the façade of the structure, on the roof, and some in the house attached to palm tree mounts. “The fixtures create fantastic aerial pattern that output clear across the entire venue,” he said. “The positioning of the beams created a sense of immersion for the audience of being completely surrounded with moving light. The 5R Beam is compact and efficient on power, which allowed me to mount them to the palm trees that flanked the pool. This opened up the possibilities of extending the lighting design further into the house instead of focusing too much on the main stage.”

Frank explained that the ZCL 360 Bars played several roles, primarily as a wash light when zoomed out but also to create linear details with LED pixels: “This is something I notice more and more in our industry – the use of pixels to create linear details that draw focus to certain parts of the stage. I would point the array of pixels on the ZCL towards the talent on stage. The audience’s eye would be naturally drawn back to the stage if they ever got lost in the rig.”

The SixBar 1000s, 1m long color-changing battens with 6-color LED multi-chips, fulfilled a special role and were used to light up the pathways in the pit under the structure. Frank commented: “A really cool feature of this production is this concept of being able to visit the bar directly from the dance floor. Audience members can walk from the dance floor covering the pool under the downstage lower tier to get a drink from the pre-existing bar then turn around and walk right back out on the dance floor and continue enjoying the event. These fixtures gave me a large range of saturated colors to choose from that could keep what was happening under the stage in the same color palette as what was happening on top of the stage.”

“From there I built systems of fixtures that played together as one large canvas,” he added. “The beams along the façade of the truss as well as in the house and on the roof balanced the fingers overhead. The ZCLs Bars were used as diagonal back lighting and top lighting in conjunction with the side lights. The FLXs were placed above the stage on the fingers because I used them as hybrid fixtures that could tie in with the spots on deck or with the aerials, with the beams on the façade or in the house. They can even tie in with the wash lights coming from the side trusses.”

Frank values the close relationship that Everlast Productions has created with Elation Professional “because we know that we are getting a professional fixture for a good price,” he said, adding: “Elation products have a high build quality and light output that is hard to find anywhere else and the wide range of products gives designers and programmers options in the rig.”

Frank concluded: “We were blessed that weather wasn’t an issue but every time you are sending moving lights outside you are rolling the dice. I would rather stack the odds in my favor by getting IP65 rated moving lights.”