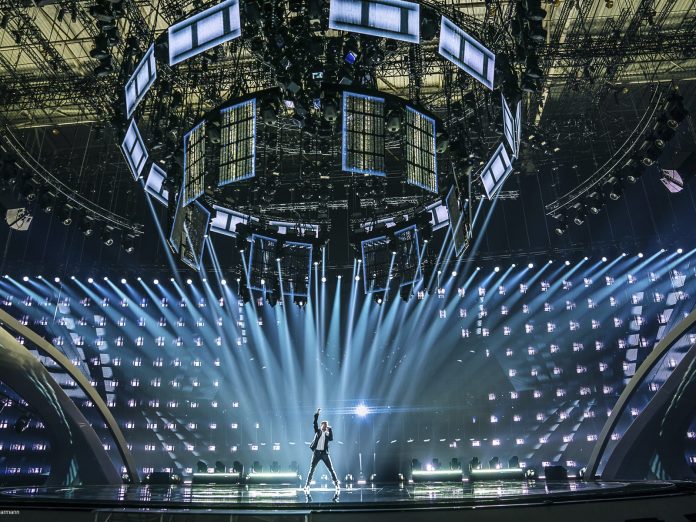 For those of us who kept a keen eye on the entertainment technology package on the recent Eurovision Song Contest, it was obvious from the start that lighting designer Jerry Appelt had big plans for Elation Professional’s Paladin strobe/blinder/wash lights. Once the first semi-final aired on 9th of May it didn’t take long for the back wall matrix of 351 Paladins to be called into action, and was, repeatedly, across two semi-finals and one grand final show.

“I wanted to create an additional layer behind the LED wall, something that had impact but that could also work together with the LED video and other lighting,” said Jerry Appelt, who was the first LD worldwide to use the fixture. “We used the Paladins independently and also pixel-mapped video across them. Some of the delegations even asked to have the Paladins used in their performance to give it more power.”

When Appelt was on the hunt for a strobe effect that he could place behind the huge semi-transparent LED video wall that served as the all-important visual backdrop, a shoot-out of fixtures was set up in Cologne and Appelt liked what he saw in the Paladin. “We chose the Paladin and it did a marvellous job,” he said.

Paladin is a versatile RGBW luminaire with 24 x 40W RGBW LEDs and zoom that functions as a bright blinder or strobe, powerful wash light, or, because of its multiple pixel zone control, can be used for pixel map and eye candy looks. With 42 different songs to highlight over the course of three huge Eurovision shows – not to mention rehearsals and a host of other performances – the Paladin’s flexibility allowed Appelt to be highly creative when custom designing unique looks for each performance.

Paladin effects popped through the Eurovision LED screen, sometimes as impactful strobe/blinder effects or chases and sometimes as more subtle eye-candy or warm or cold light twinkle effects, and then stealthily disappeared when not in use. The fixture is also IP65 rated which means it can be used on outdoor events without the hassle of weather-proof coverings. Eurovision Song Contest Head of Production Ola Melzig was equally enamoured with the fixtures, stating, “The Paladin kicks ass! I love the output, the colour and the zoom. It’s an awesome fixture!”

As one of the most watched entertainment shows in the world, Eurovision is a unique showcase for musical talent, as well as the entertainment technology that supports it, and novelty and innovation are keys. “The goal was to create a state-of-the-art light show,” Appelt said, “and I was really quite happy with the result.”

Elation Professional was proud to have been an Official Technical Event Supplier of this year’s Eurovision Song Contest with over 800 lighting fixtures making up a large portion of the intelligent lighting package. Held 9th-13th May at the International Exhibition Centre in Kyiv, Ukraine, some 11,000 spectators attended each show with over 200 million viewers in 50 countries tuning in to watch the grand final on 13th May.