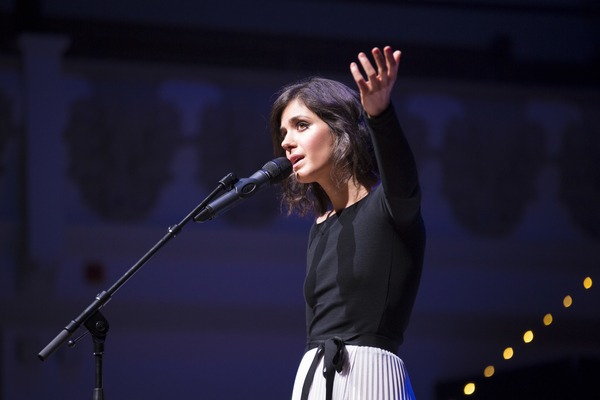 Georgian musician Katie Melua is renowned for her vocal ability, opting for the DPA d:facto vocal microphone to support her run of European dates.

Front of House engineer Bryony October said: “The d:facto really captures the rich and beautiful tones of her stunning voice with very little effort on my part. Fellow engineers raved about the d:facto and after visiting the DPA factory in Denmark, I too quickly fell in love with it and now use it almost exclusively as my ‘go to’ vocal microphone. Because she doesn’t play guitar in every song we continued to use a wireless version, as she has done in the past, with both Shure and Sennheiser wireless systems, so that she could take it off the stand and move freely around the stage.”

As well as paying careful attention to the vocal sound, October was also keen to use DPA microphones on the drum kit due to the very dynamic role of the kit in the sound mixes.

“Drums were the first thing Katie spoke to me about when we were discussing her live sound as she was concerned that they should always be as subtle and quiet as possible to allow the very quiet and delicate songs space and presence, yet needed to provide the drive and feel in the heavier numbers,” October says. “For this reason, I needed microphones that could handle high SPL when the drummer played with sticks, but were also sensitive enough to convey the more subtle nuances of playing with brushes and mallets,” October explained.

“This combination of microphones was a real dream as they were able to handle the SPL, yet were incredibly detailed when he source was at low level,” she says. “In terms of the choir, it was a real challenge with a live drum kit next to 8 open condenser microphones in a hugely reverberant arena, but the directionality and side-rear rejection of the DPA d:screet 4098s made the job less daunting because at low gain I was still able to pick up the four part harmonies of the choir with the most spine tingling clarity, yet without their sound being polluted by the band on the stage or the venue’s 8s decay time.”

“I have worked extensively with DPA microphones in an orchestral setting at the National Concert Hall in Dublin, where I have mixed broadcast audio for RTE Lyric FM,” she says. “I then naturally chose DPA when mixing FOH for singer-songwriter Keaton Henson who uses live cello/string quartet and a full grand piano.”

DPA’s UK distributor, Sound Network, with whom October has had a long and fruitful relationship, supplied all the microphones for the tour.

“Sound Network has always been an incredible support to me,” she says. “When I needed an additional d:facto capsule for the Shure radio system we were using in Georgia, they sent one for next day delivery. Nothing is ever too much trouble for them and I am so appreciative because I feel like a very valued customer. I also want to give a big shout out to all the incredible ladies in DPA’s factory in Denmark because I have huge appreciation and respect for their skills and delicacy.”