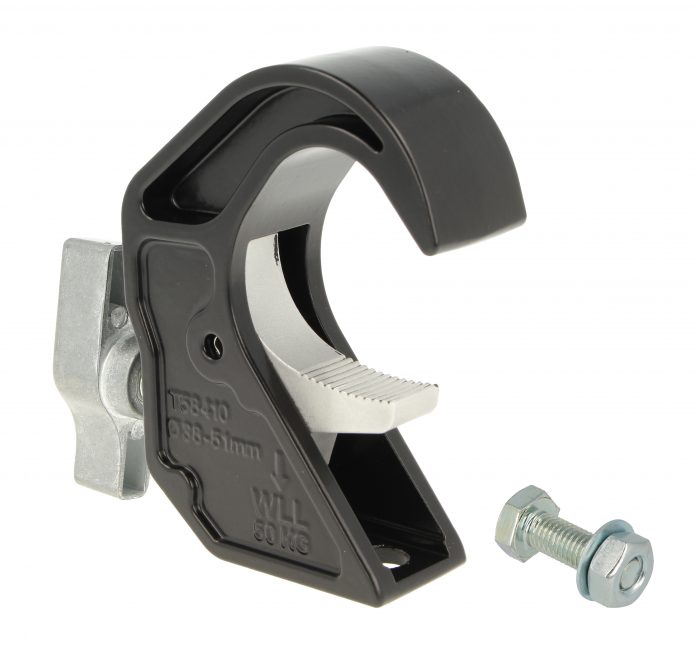 The new Doughty Fifty Clamp will make its Prolight + Sound debut this year. The bigger brother of Doughty’s best selling Twenty Clamp, the Fifty Clamp will be on display in Hall 12.0, stand D84. Mark Chorley, design engineer at Doughty commented: “We are really excited to hear what people visiting the show have to say about this new clamp. Early indication is that it’s a bit of a game changer. Some of our customers have already told us that the extra 30kg is going to make a big difference.”

The Fifty Clamp has TUV approval, a SWL of 50kg and has been designed to fit tube diameter 38mm – 51mm. It is made from pressure die cast aluminium which prevents damage to thin wall truss. It is captive with M10 or M12 bolts and comes supplied with an M10 fixing kit. “It’s already available to order,” explained Mark so we are looking forward to gathering additional feedback as uptake increases.

Doughty will also show its new Scaff Boom Arm and Heavy Duty Boom Arm at the show. The Scaff Boom Arm has been designed in response to customer demand and is very much a ‘get out of jail’ item, set to become an essential part of any took-kit. Mark continued, “It will allow the user to make their own boom arms out of materials that they have to hand, in the event that they find themselves on site and suddenly needing a boom arm of a certain length.”

The Scaff Boom Arm will take 48mm aluminium barrel or scaff tube which can be cut to size depending on the requirements of the particular project. While Doughty is unable to quote a safe working load for the product, each piece of kit will come with a chart, which is also available in Doughty’s Little Blue Book catalogue and on the company’s website. Mark continued: “Because we cannot predict how the user will fashion their boom arm, we have tested several different tubes of different sizes and suggested a SWL. Of course, if our customers have any questions, they can get in touch at any time. We encourage people who will be on the floor at Prolight to come and see this new item for themselves on our stand and decide for themselves if this is a piece of kit that will make their working lives easier.”

As well as the new products on the stand, Doughty will also be showing it’s Space Saver Omega which is in stock and ready for shipping, as well as a wide range of its other kit. Julian Chiverton, sales director said: “We always look forward to putting ourselves in front of a truly international audience at Prolight + Sound. The show is so valuable to us as it gives us a chance to really understand what our customers across the globe want from our products. We know that quality and great customer service are high on the agenda but we also like to hear about the items on people’s wish lists. So many of our products are designed as a result of a customer request, so we encourage everyone visiting the show to come and tell us how we can help them tick more boxes.”