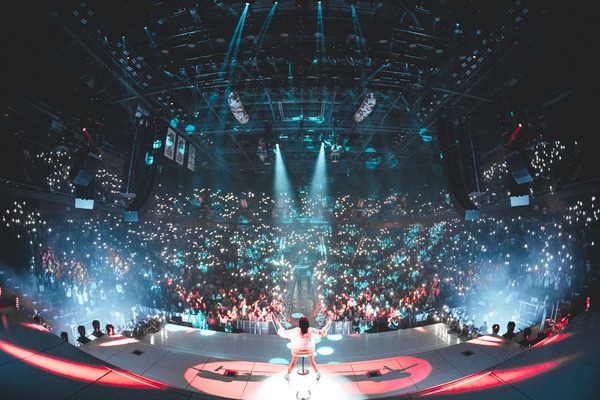 “It’s a pretty intense moment,” commented Front of House Engineer Vincent Casamatta of the point in the show where Halsey and her dancers perform on a B-stage filled with about 20 gallons of sprayed water. “There’s no way I could stay at the console and not get me and the console soaked.” Instead, Casamatta and FOH Systems Technician Dan Bluhm turn to the DiGiCo SD SC2 app, which allows remote, wireless control of any DiGiCo SD mixing console from an Apple iPad.

For 2 songs, the FOH team discreetly pulled a tarp over the desk and move to another part of the venue to seamlessly continue the show mix. “The only other way to do that would have been to mix from under the tarp, and you wouldn’t want to have to do that,” Casamatta said. “I have full access to the console through the app and we never miss a beat.”

Monitor Engineer Scott Wasilk also used the SD SC2 app, bridging the gap between monitor world and the stage, which is substantial due to the complex nature of the production. “I’m onstage quite a bit, checking how they hear it there,” Wasilk explained. “It’s so much easier than relaying information from the stage back to the console. She likes to keep one ear open, so we basically have set up a mini PA on stage for her, with a small cluster of flown d&b J8 speakers aimed at her. It’s unconventional, but the SD10 handles it great.

“I look at compression as a vocal effect, particularly in modern pop music, and I’m using super-aggressive compression with a quick release, using the Waves CLA-76 ‘Blue Stripe’ 1176 emulator through the console and it just sounds great,” he expressed. “It’s tactile, really sticky-sounding effect that’s great on punchy vocals.”

Wasilk and Casamatta are fans of the DiGiCo SD10’s feature sets, including snapshot automation, Wasilk often utilises multiple snapshots within a song, courtesy of rack sharing between the consoles and the 2 SD-Racks and an SD Mini-Rack.

“We have a total of 75 channels that we can send from anywhere to anywhere over fiber, and that’s a level of flexibility that it would be hard to suddenly not have,” added Casamatta. “Once you’ve experienced that, you can’t work without it.

“It’s so much easier sometimes to be able to communicate via text while a show is on. It seems so simple, but it can make a huge difference.” In fact, when you add up all the features, the SD10 is way more than the sum of its parts in such a compact form factor. “We get a lot out of them, that’s for sure,” concluded Casamatta. “But we use all of it.”