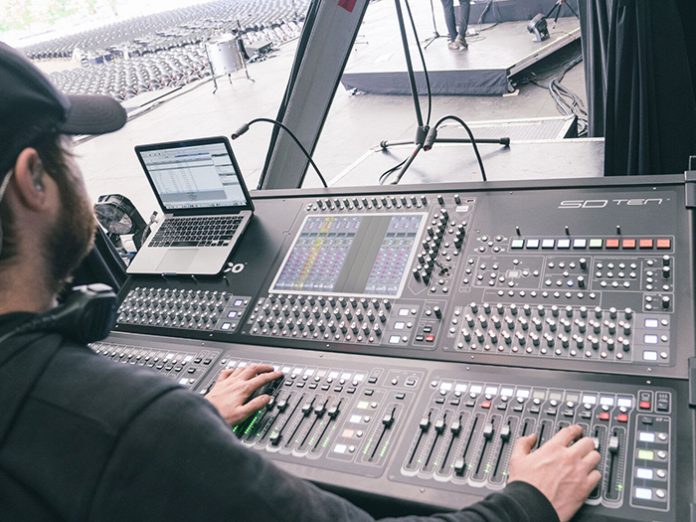 For his current 2018 tour, Vance Joy’s monitor engineer Mani Hammond deployed a DiGiCo SD10 provided, along with the rest of the audio equipment, by British rental company Encore PA.

Mani ran 12 channels of in ears and used the onboard reverbs and just a few Waves plug ins, liking to keep things as simple as possible. He had up to 52 channels of inputs including drums, bass, acoustic and electric guitar, Keys, and a horns section, with the inclusion of a B stage increasing the channel count slightly.

“We are carrying most of the PA throughout the tour and we’ve managed to take the control package everywhere with us, which has given us great consistency and, because we’re running on Optocore now, we also have total redundancy,” said Mani. “It has been very solid, and the sound quality is fantastic.”

Mani continued: “There are many powerful features to this desk I am not taking full advantage of! The on screen Aux to Fader mode has been great however, making it really easy to change multiple mixes simultaneously while never loosing focus on the main mix.”

Mani added: “The sound of the guitars changes according to how well-used its strings are, as well as the temperature and humidity of the room, so I have a bunch of EQs set up for various situations – fresh strings / worn strings / hot or cold temperature,” Mani stated.

“Also, Vance’s guitar playing can go from delicate finger picking to strumming pretty hard very quickly throughout the set. It’s really dynamic, so the Dynamic EQ and Dynamic Comps have been extremely useful in getting these peaks under control.”

Mani also made use of a DiGiGrid MGB interface to record the show onto his laptop using the input switch function, which allowed him to do virtual soundchecks.

Mani concluded:“Again, because the acoustic guitars can change so dramatically with all the temperature and dynamic variables, it’s been hugely useful to being able to change settings on the SD10 via virtual soundchecks without needing Vance on stage any longer than he needs to be”.