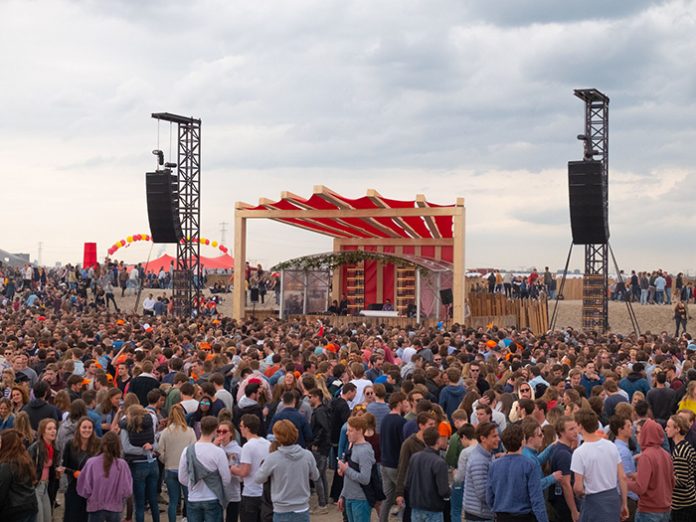 The fast growth in popularity of Amsterdam’s Oranjebloesem festival called for a louder, higher quality and more directional sound solution in one of The Netherlands’ most built-up cities. Peak Audio constructed a d&b GSL system to achieve just that.

“We positioned Oranjebloesem as an alternative to the more traditional King’s Day festivities and it’s now one of the major house events in Amsterdam,” says Ridder Haspels, co-owner of the city’s events outfit Chasing the HiHat, which organises the festival.

Twenty thousand people attended Oranjebloesem 2018, to enjoy four stages of DJs and live bands at Blijburg aan Zee, Amsterdam’s beautiful go-to beach destination located just outside of the city centre. It offers underground music lovers an attractive alternative to clubbing in the downtown area, with sandy beaches and spectacular views. However, it is close to residential areas.

“When it comes to noise control, the regulations in Amsterdam are very strict. There are always challenges when it comes to having the proper levels in front of the stage versus nuisance for the local residents,” Haspels explains. “To reach a solution, we used Event Acoustics’ MeTrao system to monitor the sound levels at both FOH and the perimeter of the festival. This, in combination with the d&b audiotechnik GSL system, gives our sound operators the tools to get the best possible sound levels within the boundaries set by the Amsterdam Municipality.”

For the main stage at Oranjebloesem, Haspels and his team specified a GSL system consisting of eight GSL8 and two GSL12 speakers per side, in full-range mode, with eight SL-SUBs, in infra-mode. Four Q7s were used as infill and outfill. All were driven by fifteen D80 amps. Monitoring for the DJs and bands on-stage was via two Y8 and four Y-SUBs, powered by a single D80 amp.

“The d&b GSL system gives us a lot more freedom in terms of stage positioning, which is great, especially since space is scarce in the Netherlands,” Haspels continued. “Being able to really tailor the sound to the area greatly reduces the noise local residents might experience.

“I was impressed by the pressure the system was able to generate over the desired area. When you walk around the measured sound area and then start moving outside of it, the sound levels drop significantly – and much more than I anticipated it would. The noise cancellation on the side of the new GSL loudspeakers definitely works well. The feedback from the sound operators and the crowd was all very positive.”

The GSL system was supplied to Haspels and his team by Peak Audio, with the company’s Guus Hoekstra serving as production manager for the festival. The system was designed by Anthony Kappel.

“In 2018, Oranjebloesem doubled in size and so did the PA systems,” said Hoekstra. “Due to the noise pollution regulations in Amsterdam, we thought it would be great to take our GSL system to the beach and use them outside for the first time with its full-spectrum cardioid behaviour.

“The cardioid function of the line array works incredibly well and makes noise pollution much easier to control. I personally think d&b took its line-array design to another level with GSL. Everyone was very impressed – the system behaved unexpectedly well outside. It offers a lot of power, lots of detail and is a beautiful sounding cabinet.”

Some of the Netherlands’ hottest stars performed at Oranjebloesem 2018, including the Techno artist Colin Benders, the DJ duo Dekmantel Soundsystem, DJ Joris Voorn, and Afrobeat rockers Jungle by Night.