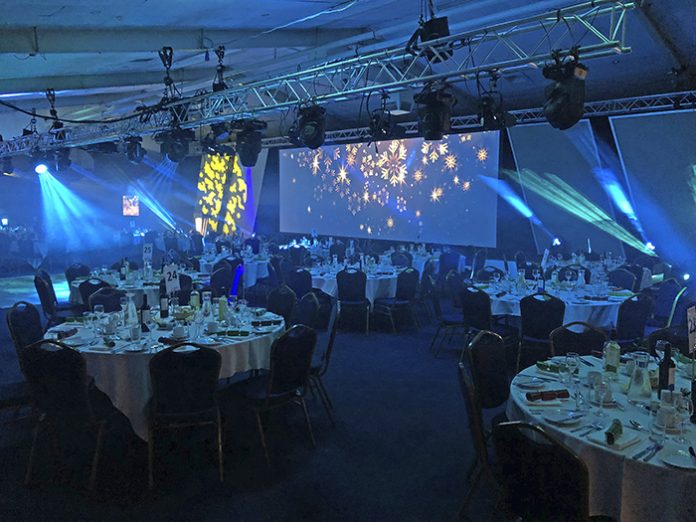 The Agriculture and Horticulture Development Board (AHDB) asked West Midlands based Central Presentations (CPL) to design and deliver all the technical elements for its 2018 annual staff conference and awards, which encompassed sound, lighting, video, staging and rigging.

The high profile event for 400 delegates was staged in Warwick Hall at the NAEC, Stanleigh. It comprised a fully seated conference presentation during the day, which was transformed into a glamorous setting for the evening’s dinner and awards. The client wanted to use the width-ways orientation of the venue for sightlines, so CPL’s project manager Lee Gruszeckyj proposed a widescreen video blend as a striking visual starting point to align with the geometry of the space. Challenges included dealing with the room’s sloping floor and an odd shaped roof with lots of ducting and piping, all of which had to be cleverly masked without losing height in the beautification process.

The 30ft wide by 10ft high upstage projection screen was flanked by gauze panels designed to take lighting nicely and elongate the space. These were flown on the same truss as the screen, and the look was neatly finished with a black backdrop right at the back. In front of that was the stage which measured 15m wide by 3m deep. There was a TV style studio set at one end with a sofa and soft seating for discussion sessions.

The screen was fed by 2 of CPL’s Panasonic 10K laser projectors flown on a front truss utilising custom frames from sister company Rigtec, which specialises in the design and fabrication of innovative rigging solutions. The screen blending and projector alignment was achieved using Panasonic’s Auto Screen software, and at the hub of the video control was a Barco S3 for switching and screen management.

The sources were stored on a series of laptops running DT Videolabs PlaybackPro and Microsoft PowerPoint, and also which included some funky bespoke graphics and awards idents crafted especially for the event by AHDB’s in-house graphic design team. A pair of 75inch LED screens were positioned as repeater screens half way down the arena so those at the back could get a better view.

Gruszeckyj and the CPL team decided to use lighting, colour, texturing and effects to help transform the room and create a wide range of different moods and atmospheres. Over 50 moving lights – a combination of Claypaky Sharpies, Mythos and a.LEDA K10s fitted with B-Eye lenses; Martin Professional MAC Aura led washes and Robe Spiider LED wash beams – were installed. These were distributed on overhead trusses and across the stage deck.

The lighting during the day was subtle, lots of crisp whites, with some gentle colouring and breakup patterns, which switched to more dramatic effects for the evening, where the audience was bathed in colour to make the space intimate and swept up into the action and excitement of the awards with more energised lighting. Lighting was run on an Avolites Quartz console with a Playback wing.

The acoustic challenges for audio included dealing with the width of the room and the lively environment with concrete floor, brick walls and metal roof. For speaker positioning, d&b audiotechnik’s ArrayCalc was again invaluable in suggesting the basic positioning and optimal coverage, with Gruszeckyj and the crew doing some fine-tuning once on site.

The speakers were all d&b audiotechnik E8s. It was a point source system utilising 8 speakers, 6 in the room and 2 for front fills, running in conjunction with 4 B4 subs positioned behind the set, mixed via a Yamaha QL1 console.

The microphone package included 2 catch-boxes for the Q&As, 8 Shure radios with DPA headsets and 2 Shure hand-helds as Q&A backups. The lectern was fitted with a Sennheiser ME34 chosen for its excellent spoken work clarity, and used for presentations and award winner speeches. CPL had a full rig day to get everything installed with a crew of 10 locals, and a show crew of 4 ensured everything ran smoothly and efficiently.

“We really enjoyed taking a basic utilitarian space and making it into something totally different, avoiding clichés and presenting the client and their guests with a fresh and invigorating event,” Gruszeckyj concluded. “It looks like a flat room at first glance, but there’s about a 2ft slope across the floor and the roof shape is also idiosyncratic. Rather than just go for another draped off marquee look, we tried to be different”.