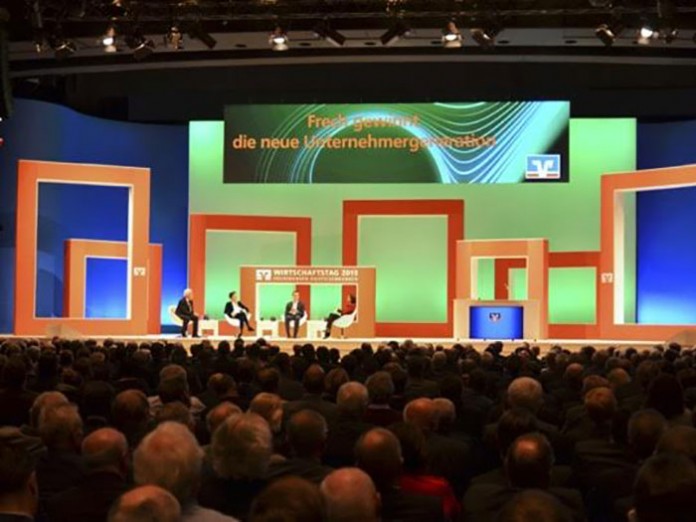 Contour Veranstaltungsservice has invested in 30 Clay Paky 100 Show Batten AS units. Besides the AS units, the company also used 14 new Show Batten 100s, with symmetric optics, at Wirtschaftstag 2015.

The Wirtschaftstag is a business forum that takes place annually at the Frankfurter Jahrhunderthalle. It is considered the barometer of the German economy and this year’s theme of “Wealth – Freedom – Security: scenarios for a changing world” brought together – once again – prestigious speakers such as Jean-Claude Juncker, Sahra Wagenknecht, Niki Lauda and others. The event was moderated by Sandra Maischberger and Udo van Kampen.

The moving Show Battens were used to illuminate the horizon of the highly original stage, designed by Contour for this event. Project manager Stefan Kevenhörster gave us his thoughts: “We worked hard to find the right lights for this field of application and the result satisfied us entirely. The Show Batten 100 AS is a truly powerful tool for illuminating a horizon evenly from close up! Its tilt feature also gave the lighting operator other options for shaping the background.”

The Clay Paky Show Batten 100 is a moving LED bar for professional stage lighting. The 10 high-performance 15-watt RGBW LEDs are arranged in such a way as to make a constant pixel pitch possible even with several Show Battens installed end to end. The Clay Paky Show Batten 100 also bewitches you with its individual pixel control, extremely fast electronic zoom (0.3 seconds) and 16-bit resolution. In addition to a rapid 240° tilt, in less than 0.2 seconds, its broad palette of sixty pre-programmed macros offers numerous possibilities to meet the most diverse needs. The AS version also has an ovalizer filter, which further increases the beam angle.