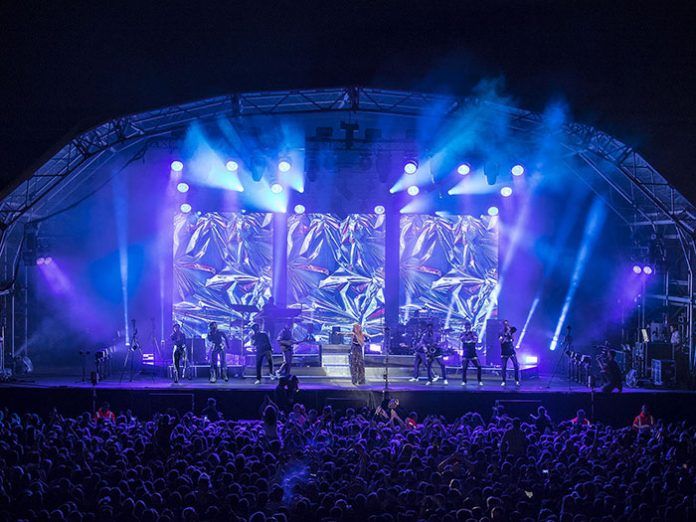 One of the early highlights of summer 2017 was Wildlife festival staged at Shoreham Airport, Brighton – a musical adventure organised by SJM and curated by popular dance artists Rudimental and Disclosure.

This year London based lighting and video rental specialists, Colour Sound, supplied lighting for four Wildlife stages and LED screens for one.

For three of the arenas X1, X3 and X4 , lighting was designed by Simon Barrington of Sibar.

The 60 AquaBeams framed the LED surface on all sides and were positioned on the floor along the PA wings, providing powerful beams and effects that worked in conjunction with a wide selection of video content played out onscreen.

Joining the AquaBeams were 12 4-lite Moles, also placed around the screen perimeter and 31 Martin by Harman Atomic strobes, which were concealed behind the semi-transparent LED, adding depth and a different look for the stage headlined by Fatboy Slim on the Friday and Eric Prydz on the Saturday.

An Avolites Arena console took care of the lighting control, together with Avo dimming and distro with guest LDs welcomed by Colour Sound’s Tim Meadowcroft, Stu Barr and Josie Sodund.

Four large lasers on this stage were supplied by ER, with Colour Sound also delivering a selection of high output atmosphere machines, which were dotted around onstage and at FOH.

This Orbit style structure formed the main band stage at one end of the site complete with a production lighting rig designed by Dave Kyle for Colour Sound.

The screen was a 12m wide by 5m high upstage surface constructed from Colour Sound’s high quality BT7 product, which was tech’d by Frank Williams. Media servers and content were from Digital Insanity.

This was the smallest stage, presented as a wide format in a compact 4 poled tent, with an all action line-up that flipped between bands and DJs.The lighting design was substantial, amounting to nearly 250 fixtures.

The count was headed by 98 Chauvet R2 Rogue Washes, 48 Chauvet R2 Spots, 28 Robe Pointes – used for all the main effects – and joined by 6 x Claypaky Alpha Spot 1500s, 22 x SGM X-5 LED strobes and 48 Chauvet COLORBand Pix LED battens. All of these were attached to a comprehensive scaffolding structure.

The various LED sources were mapped in the Avolites Arena console, and the design concept was based on funky and fluid effects created using these and some clever programming. Colour Sound crew of Alex McKoy, John Richardson and Nick Waters put in some hours and imagination on the desk which really paid off when it came to showtime and presenting a different and original look.

Décor, inflatable and quirky scenic wizardry from Elrow defined the visual theme in this 8 poled big top tent – a cool and colourful mix of vibrancy, craziness and fun matched by some equally mad lighting. Eight trusses were flown from the tent king poles and used in conjunction with 32 scaffolding ‘perch posts’ around the perimeter of the tent. Fifty Robe LEDWash 600s highlighted the various scenic elements and props, together with 28 LED PARs and 66 of Colour Sound’s proprietary LED Dragon PARs.

Thirty-two Dragon Beam 200s provided effects and eye-candy, together with 32 Chauvet COLORBand Pix and 32 x Atomic strobes – the latter two products were attached one each to the 32 perches.

This all around design was developed to immerse and engage the audience in the atmosphere and action.

James commented: “Naturally, everyone worked hard and very solidly to ensure that all our stages were ready when doors opened the following day. It was great to be part of this team effort that embraced all departments”.

Colour Sound’s Alex Ryan said: “This was definitely one of the festival highlights of the year so far. It was great to welcome and support all the incoming LDs and operators and make sure we accommodated their extras packages and looked after all their needs, and we all also really enjoyed the buzz and the incredibly warm vibes of the event.”