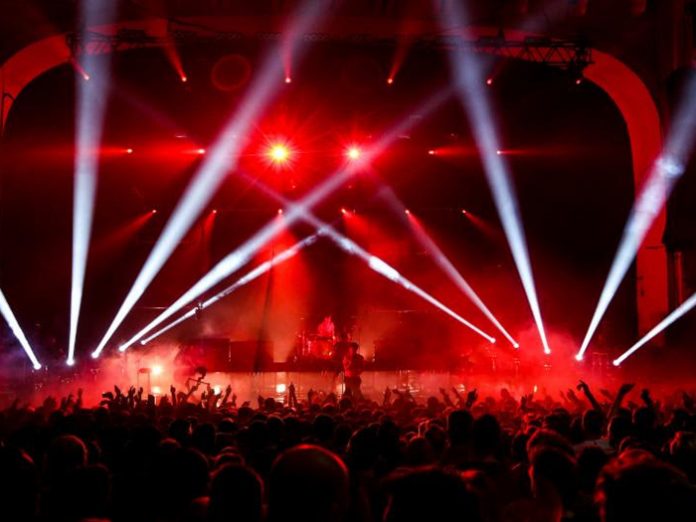 In demand lighting and production designer Steven Bewley selected the award-winning Claypaky Mythos and Sharpy to create signature lighting looks for alternative rock band ‘Nothing But Thieves’ on their debut album tour, which ended with a sensational show at London’s iconic O2 Academy Brixton.

“More and more bands are asking for lighting looks that create a strong visual impact across social media platforms,” explained Bewley. “I was mindful of this when I took the reins on the design for Nothing But Thieves. I programmed the show on my own set-up and sent them through videos on how it could look. Luckily I pretty much nailed it the first time and we ended up with a show that was very clean, very atmospheric but at the same time very much a rock show.”

Bewley’s design provided the band with rich visual content with many of the band’s fans taking to social platforms to share shots of the tour’s production elements, including dazzling effects and high-impact moments created by the Mythos and Sharpy fixtures.

“The majority of the Mythos were in the show’s roof package,” said Bewley. “As the Mythos is a hybrid fixture, operating in wash, spot and beam, I was able to create the ‘clean/rock’ looks I was after.”

“The Mythos’ colour mixing was perfect for this show,” said Bewley. “We used a lot of ‘off colours’ so that when those moments of deep red came through on the key tempo changes they really made an impact. I combined these colours with the animation wheel to create strong atmospheric aerial effects that were powered vertically from the roof and floor.”

Providing a clean backdrop for the lighting was Bewley’s uncluttered stage design. The designer positioned risers and fixtures using neat angles and asymmetry to create a sense of architectural unity on stage even when it was unlit.

“I designed a series of raised podiums that increased in height as they progressed to the back of the stage,” said Bewley. “On top of each one I positioned a single Claypaky Sharpy unit. I wanted to create a strong depth of field by combining the physical architecture of the podiums and the light architecture of the Sharpy’s clean beam.”

The Sharpy is a small but powerful fixture, renowned for its perfectly parallel 189W moving beam capable of producing 59,760 lux at 20m – a brightness normally found on much larger fixtures and at far greater wattages.

“I didn’t want to create beam looks across the crowd as per more traditional rock shows,” said Bewley. “Instead I wanted to use the tight Sharpy beam to light the band across the stage from left to right and vice versa. By doing this we created a really atmospheric feel where the band performed between vertical beams instead of being traditionally lit from the front. This gave the overall production a real signature look.”

Nothing But Thieves originally hail from Southend-on-Sea in Essex and have seen a rapid rise in fame since forming in 2012. The five-piece have now completed their eponymous debut album tour and are working on their second album.