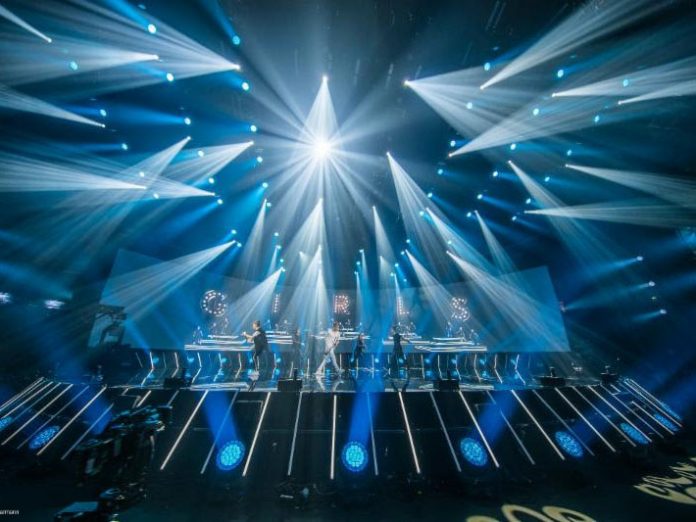 “We had to create different visuals for each of artists competing in UMK,” said Eero Helle, lighting and visual designer for Bright Group. “These looks were influenced by each singer’s music and their individual requests. As the event was being filmed the lighting had to be of such a quality that it would translate well to camera. This was a challenge as we had to fulfil all of this criteria without changing lighting fixtures or their positions in the rig.”

“We selected the A.leda B-EYE K20 because it is so much more than a regular wash light,” said Helle. “The fixture provides an excellent wash but it also it gave us the options of aerial effects and to pixel map the fixture’s front lens.”

Helle refers to A.leda B-EYE K20’s individually controllable 37 RGBW LEDs. The feature allows a designer to take the fixture from beam to wash with an impressive zoom range of 4°- 60°. Helle combined this with the A.leda B-EYE K20’s pan (540°) and tilt (210°) movements, meaning that he could reproduce multiple looks traditionally only achievable through a wider range of fixtures.

“I’m such a fan of the A.leda B-EYE. For us, it served so many different purposes,” says Helle. “When the fixtures were not in use on stage we could blend them in with the rest of the set having just the beams on display.”

On a grid-shaped truss directly above the stage Helle rigged what he dubs as the ‘industry standard’ beam fixture, the Claypaky Sharpy. The multi-award winning 189W moving head weighs in at just 16kg and is renowned throughout the entertainment sector for its impressive output and razor sharp beam.

“The Sharpys’ beams gave greater depth to the stage; we used them as strong down lighting to create a three-dimensional environment,” said Helle.

As UMK was broadcast live on Finnish TV and filmed for the Eurovision Song Contest YouTube channel, it was imperative that Helle selected lighting fixtures with strong colour rendering to translate his design truthfully to the camera and work with the set’s large video element.

Both the A.Leda B-EYE K20 and Sharpy have advanced colour options with the A.leda B-EYE K20 allowing for full integration among conventional fixtures through its tungsten lamp emulation and superior white CT (2500-8000K) and RGB auto-tuning to lamp CT emulation.

“It was great to be part of such a sophisticated production,” said Helle. “It was an exciting challenge for our team to create a production that made each performer look unique and at their best.”

UMK took place on the 28th January 2017. The winning entry was duo Norma John who will perform their original song ‘Blackbird’ at the Eurovision Song Contest 2017. Eurovision 2017 will be held between the 9th and 13th of May at the International Exhibition Centre in Kiev, Ukraine.