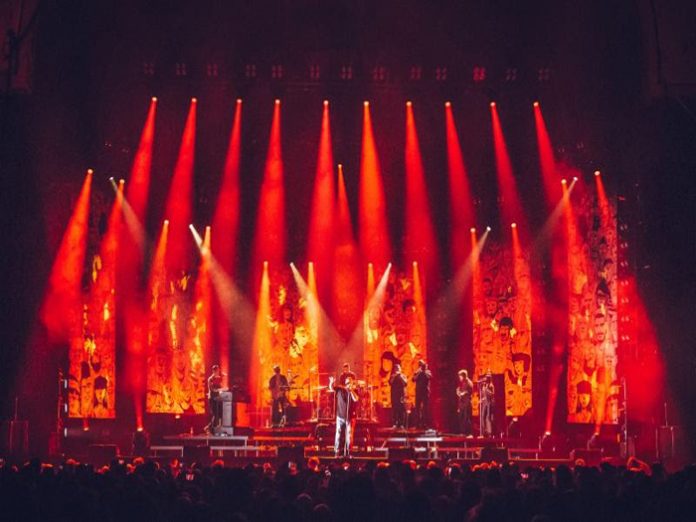 Lighting Designer Will Potts found inspiration in the subtle shapes of nature for his current lighting and show design for award-winning singer Rag’n’Bone Man. Potts’ design incorporates ‘sacred’ geometric shapes and an illustrated backdrop of personal significance to the singer. To carefully light these elements, he chose the Claypaky Scenius Unico.

Having worked with the singer for little over a year, the designer delved deep into the psychology of Rory Graham’s (a.k.a Rag’n’Bone Man) music, drawing on recurring themes within the artist’s debut album ‘Human’ to inspire and craft his detailed show design.

“There’s lots of religious and spiritual references in the language of Rory’s songs,” said Potts. “When I asked him about these, he slowly revealed a fascination with the afterlife, death, spirituality and the soul. I had to find a way of reinforcing this, but doing it subliminally. So, the structure and proportions of the stage and light design are based around an octagon which holds the meaning of regeneration, totality and rebirth.”

In fact, the entire show is carried on a theme of connectedness and this is apparent in the high level of detail in the design. As well the geometric influences in the production, the show features a hand-drawn series of backdrops featuring caricatures of the singer’s friends, family and musical heroes.

“For the backdrop, I worked with one of Rory’s Rum Committee members, Stewart Chromik,” added Potts. “He hadn’t worked on this scale before, however he did a great job and we got it looking really good. During the second song, we reveal behind the drapes, one at a time, with Kabuki drops. To get this right I needed a lighting fixture whose framing system was spot-on.”

Potts selected the award-winning Claypaky Scenius Unico for the task and was not disappointed with the outcome. “I spec’ed the fixtures because of their projection versatility,” he explained. “I used the indexing gobos, framing system, colour wheels and animation wheel to add texture to the backdrops.”

The backdrops were illustrated under Pott’s guidance, and Chromik ensured that the eyes of every caricature were drawn in such a way as to focus squarely on Rory whilst he performed.

“It was imperative that the lighting fixture I used for these backdrops kept an even power, brightness and crispness across each of the drapes so that important details, such as the eyes, were not lost,” stated Potts. “The Unico’s frosts gave a lovely, softer glow and the framing system is incredibly sharp and flexible, which helped when focusing the lights in the wide range of venues the show is performing in.”

Supporting Potts on tour is lighting director Nikita Jakovlev, who helped operate and program the show. The Scenius Unicos were supplied by global lighting and rigging hire experts, Neg Earth.

Rag’n’Bone Man is currently touring Australia and New Zealand before heading to Europe, Turkey, Israel and the US.