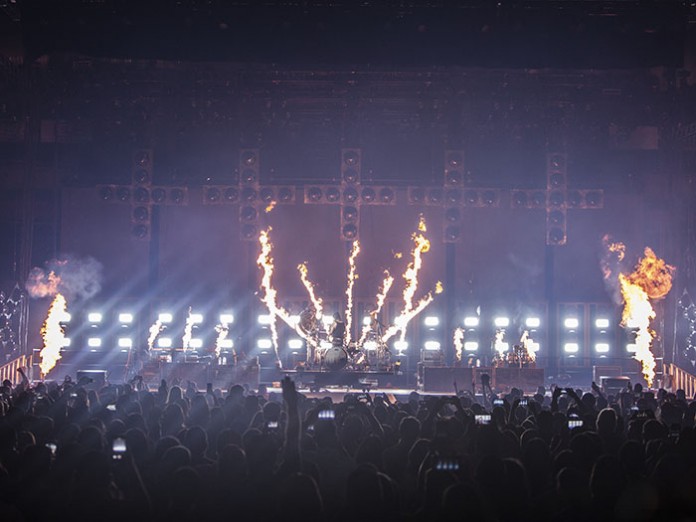 Two groups of Mythos were on upstage and side cranes. “Sometimes I used the spot function and sometimes the beam function; eight more Mythos acted as followspots,” explained Menga Cruz, the tour’s Lighting Programmer and Operator.

“The Clay Paky fixtures made the lighting design pop with their powerful colours,” Cruz said. “The Mythos were very impressive. They had the same punch of light in white or red, the gobos were incredible and the zoom was awesome. The tour was my first project with Stormys. I liked their brightness and the flash speed.”

Cruz used a full-size grandMA2 and a grandMA2 light to control all the lights, video and motors on the show. “Versatility, robustness and reliability are the main reasons I use grandMA2,” he reported.

“I needed versatility because of how we work with the system on shows. Two users worked on the two consoles. Lights and preset adjustments were programmed with the grandMA2 full size while the grandMA2 light was used for the system set up and for full tracking and back up during the show; it was operated by Tacho Gonzalez.”

Cruz hailed the “robustness” of the system, which used 35 universes. “Besides being very reliable, grandMA2 always gives you the results you expect. It’s a console that easily adapts to the user, so you are able to program your show with endless possibilities always arriving at the same result.

“A tour like this, in my opinion, could never be achieved with another console. We needed to manage nearly 10,000 parameters; one show file had over 1,600 cues for moving lights, follow spots, video servers, engines, projections and backdrops.”

He concluded, “With grandMA2, even if there’s an emergency during the show, you can solve the problem without affecting anything. I believe no other console can do that.”

The equipment was provided by Procolor of Guadalajara.