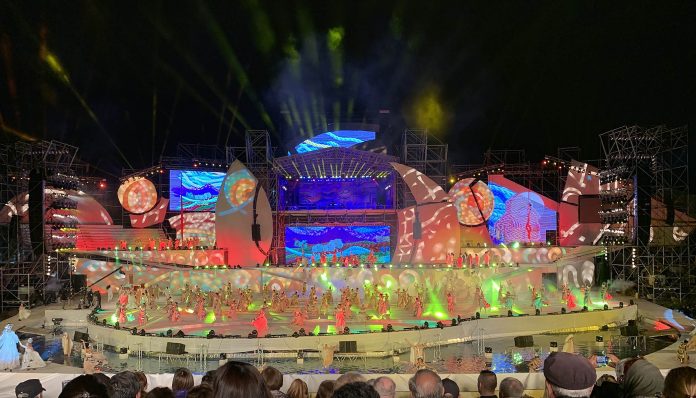 “This was not just a demo,” explained Ricardo Pegnotti, audio division director at SVC, “it was an event attended by several recognized audio professionals from the region.” In fact, one of the attendees at the presentation was Pichón Dal Pont, a renowned sound engineer and winner of three Grammy Awards. He commented on the demo and the subsequent sale of the C12 system: “Clair Brothers in Argentina? Who would have dreamed it? I’m in awe of how much quality, power and presence, within the entire musical range, this system offers. It’s incredible! I wish we had C12s for shows in my day. Just listening to them, I only need to say one word about what they are for me… perfect!”

Merino Producciones Técnicas is well known and respected throughout the region. Known best as being the provider of equipment and live production in recent years of one of the most important festivals worldwide, the “National Grape Harvest Festival,” which celebrated the agricultural work of grapes transformed into wine. The festival takes place every year in the province of Mendoza, in Argentina. It was with this wonderful festival, and many other upcoming shows, in mind that the decision-makers at Merino Producciones and the technical team of the Government of Mendoza, (the organizers of the festival) listened with great interest to the Clair Brothers C12 demo and ultimately made the decision to make a significant purchase.

The complete set purchased by Merino Producciones includes 32 C12s along with twelve dual, 18-inch Clair Brothers iS218 subwoofers and a three-point integral mounting system that allows several configurations, including the ability for them to be hung on top of the C12 linear array. Amplification consists of four racks, each composed of three Clair Brothers / Lab.gruppen CB-PLM 12K44 and a CB-PLM 20K44 amplifiers with control and monitoring by LAKE digital signal processing. The system is completed by a dozen Clair Brothers 1AM+ stage monitors.

The National Grape Harvest Festival is considered one of the five most important and popular festivals on the planet, next to Carnival in Rio de Janeiro. So significant is the National Grape Harvest Festival that at its grand opening ceremony in the Frank Romero Day Greek Theater, more than 20,000 people attend, and among them are some of the most important national, cultural, political, cinematic, sports and television personalities from Argentina and neighboring countries, as well as diplomats from numerous other countries. The Central Act, the gigantic grand finale, staged in the Greek Theater, is a spectacular show of dances, artistic representations, light and sound where as many as a thousand actors and dancers participate in a stunning exhibition of music, colour, film projection in the sky, with lasers and fireworks that illuminate the entire Greek Theatre. This entire show is witnessed by the 20,000 people and by an additional 50,000 that gather in the surrounding hills.

“The sound this year was by far better than ever.” Noted Pegnotti. “The Clair Brothers C12 line array system came through as expected, and well beyond. With this momentous equipment acquisition by Merino Producciones Técnicas, Clair Brothers will accelerate its much-welcomed expansion to new horizons across Latin America!”

Added Mr. Carlos Merino, CEO of Merino Producciones Técnicas, “I’d like to thank the following members of my team for their valuable contributions to this historic decision-making process and production: Mr. Matias Havanette – sound designer and Mariano Arias – service director. Also, the performance by the Clair Brothers team together with my technical staff was so impressive we’ve been recognized by the government authorities of the Province of Mendoza for having presented the best edition of this festival in the last fifty years!”