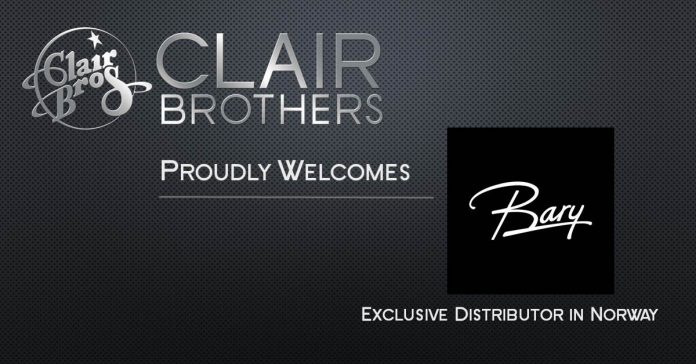 As one of Norway’s largest and fastest growing suppliers of technical solutions and equipment for concerts, festivals, events and other productions, Bary AS is also the largest, fully-Norwegian-owned company in the business. Morten Bakke, Director of Business Development at Bary AS, said; “We love a real challenge and we want Bary AS to be the best at what we do.”

When asked where and when they first became aware of Clair Brothers, Bakke smiled and said, “Since we were walking around with diapers as babies! Clair Brothers have always been there, touring early on with some of the biggest musical acts on the planet. And today, as a top loudspeaker innovator, they’re more than a highly-respected name in our line of business. To be honest, when we first thought of the idea of joining forces with Clair Brothers, we didn’t think we were being realistic. I mean, do we really believe we can get Clair Brothers in Norway? Huh? Are you nuts? This is what we asked ourselves. But, as I said, we like a challenge, so we had to try!”

Bary’s opportunity to experience a live demo of Clair Brothers products came late in 2018 in Amsterdam thanks to the Audio Specialists, Clair Brothers’ distributor in the Netherlands. “We couldn’t wait to hear these amazing products for ourselves,” adds Bakke. Bary sent a small but expert delegation of audio and technical professionals to evaluate the deeply nuanced, signature sound of Clair Brothers cabinets. “Through our years of experience, we know what to look for and we can easily spot the differences in comparative product quality and durability. So right away we could hear what the world has been hearing for decades – the goose-bump raising clarity and power of Clair Brothers speakers. We’re also very impressed with how much low-end and clarity they’ve been able to achieve in these boxes!” Josh Sadd, Clair Brothers chief engineer remarked, “I flew over to the Netherlands to meet the guys from Bary and to help them understand our company’s product line offering. I could tell they were being very deliberate and studious about their approach which is always good. I knew they were fully convinced when I saw the look on their faces hearing our 1.5AM stage monitors. Smiles I’ll never forget!”

With an opportunity such as this, Bary didn’t hold back. They quickly ordered an extensive list of Clair Brothers equipment for demo and sales purposes, including a generous selection of 1AM stage monitors, 1.5AM stage monitors, award-winning 10SPOT hybrid speakers, CB-PLM12K44 amps, CB-PLM5K44 amps, kiT-Sub-Mini+s, kiT-Sub+s, CS218-M mobile subs, kiTCurve12s, kiT12s, 8CX-P-100 point source speakers, 5CX-P-70 point source speakers, and a wealth of support products like road cases, rigging equipment, dollies, coupling links, softcovers and more. “One of the most important factors in any relationship is the logistics of delivery and service. It’s always a concern, especially when working across an ocean. But I must say, after our initial dealings with Clair Brothers, if you were to Google the word logistics, you should expect a Wikipedia page to appear with the Clair Brothers logo in it. They are that reliable!” Bakke continued by pointing out, “We got everything delivered a couple of weeks ago and have already confirmed three different installations with the 10SPOT and kiT-Subs – A total of approximately sixty speakers! What an awesome start to a long relationship with this historic American brand!”