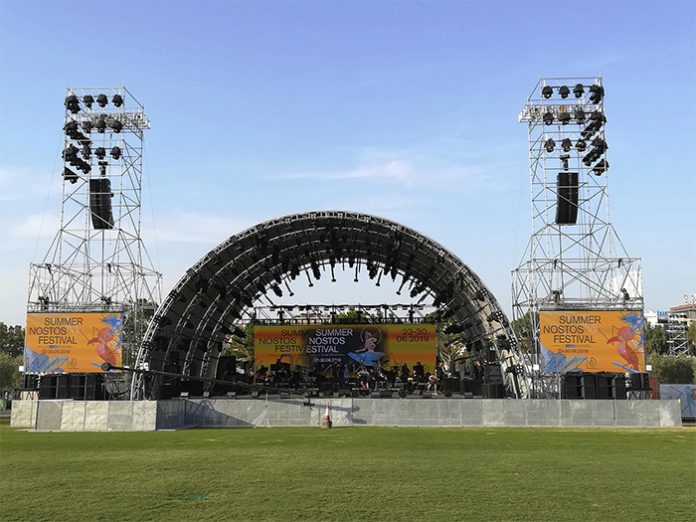 The week-long Summer Nostros Festival (SNFest) is an international multifaceted arts, sports and education festival held every June, that is free for all to attend and welcomes people of all ages. This, the fifth year of the incredibly popular festival, is where visitors with widely varying interests come together to share a creative platform while expressing themselves in an exchange of ideas. Guided by shared memories of summers past, music and melodies fill the air, with dance and stories told with laughter and fun – the beginning of another unforgettable summer – this time with the powerful sound of Clair Brothers speakers!

Like every year, SNFest 2019 was hosted by the Stavros Niarchos Cultural Foundation. This is the organization responsible for the entire construction in 2017 of the Stavros Niarchos Cultural Center in Athens where the festival is held, for the third year, right on the beautiful Athenian sea front. The venue, which also hosts the Greek National Opera and holds cultural exhibitions all-year long, and houses the national library, has already racked up numerous awards both for its innovative, environmentally-friendly construction and its hosted exhibitions.

For this year’s SNFest, Mega-Sound (part of the Oikonomopoulos Group) – Clair Brothers’ distributor in Greece, and United Technical Group (UTG), were called on to provide the loudspeaker systems on the vast “Great Lawn” stage, as well as for the smaller “floating,” stage set up alongside a neighboring canal. Ioannis Oikonomopoulos, founder and CEO of the Oikonomopoulos Group said: “This huge national festival, the biggest cultural event of the year in Greece, represented a perfect opportunity for the first official presentation of the Clair Brothers C-series line arrays – the C12 and C8 systems. It was an unveiling to the public and the press, who got their chance to hear Clair Brothers products in action. What a success!”

UTG, the largest sound company in Greece for many years, set up the C-series arrays for both stages. Oikonomopoulos continued: “The fact that there were artists from very different musical styles from all over the world put lots of pressure on the need to install loudspeaker systems that would excel no matter who was playing through it. Everyone agrees that Clair Brothers, along with Lab.gruppen amplification and Lake processing (with Clair DSPs), was easily the best choice.” It’s worth noting here that UTG is now investing to expand its stock of Clair Brothers gear.

More than thirty acts and hundreds of musicians (including large orchestras and choirs) performed on both stages throughout the week. The musical styles ranged from techno and traditional ethnic music to rock & roll and opera. Says Oikonomopoulos, “Artists and engineers were amazed with the clarity and definition of mid/highs that were simultaneous to the very impactful lows, all with very even and powerful sound distribution.” On the technical side, the C-Series C8 (with eight-inch woofers) is a three-way active (bi-amp with passive Mid / Hi) compact line array element with frequency response of 60Hz – 20kHz.

The C8 system is simple, safe and easy to use. The accompanying subs are the Clair Brothers CS118s, single eighteen-inch subwoofers. The larger C-Series C12 loudspeaker is also a three-way with two twelve-inch woofers, and twice the mid/hi as the smaller C8, it is deployed with the larger double eighteen-inch CS218-M subwoofers.

What all this adds up to are amazing results and high fives among the artists, as well as attendees lucky enough to witness the shows. “All of the artists were impressed by the clarity and power of the Clair Brothers C-series line arrays,” explained George Voudantas, manager of UTG, “In fact, some international artists were shocked because they didn’t expect to have such a new system in Greece. The managers of the SNFest were also more than satisfied with the powerful, well-balanced sound emanating from both stages.” Oikonomopoulos added: “Everyone loved the sound!”