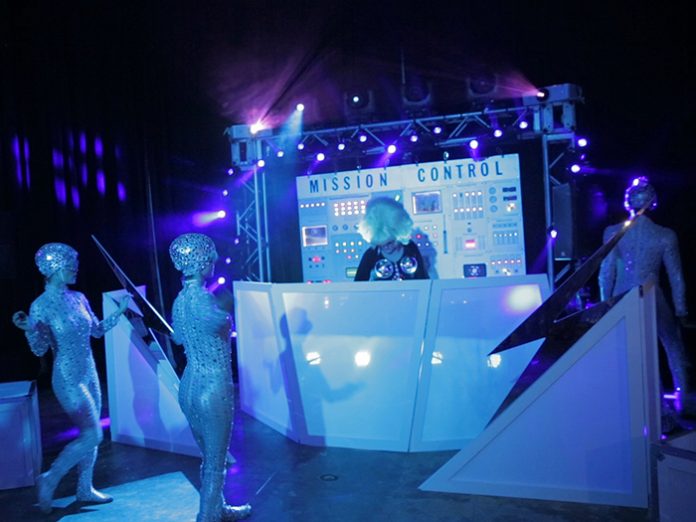 Supported by CHAUVET Professional on the evening of 30 November, the Bass Museum, Miami’s oldest art institution, celebrated its reopening after an 18-month expansion project by hosting an Intergalactic Disco during Art Basel by the legendary Sex in the City alum, Lady Bunny. Lending an aurora of celestial excitement to the performance, which was part of a grand reopening event by ACT Productions, was a sparkling and fast-moving light show created by Jon Antoine that was anchored by 12 Rogue R1 FX-B fixtures from CHAUVET Professional.

Supplied by The Design Oasis, the dozen Rogue fixtures were positioned on goal post truss surrounding the DJ booth.  The fixtures were arranged four on each side of the DJ booth and four running across the horizontal truss bar that ran over its width. Often positioned diagonally, the Rogues played off well against the modular angled white set pieces that flanked the main booth, which bore the moniker “Mission Control” across its top.

With five independently controlled moving heads and 360° rotation, the Rogue R1 FX-B units were often used to send brightly coloured razor sharp beams flying in every direction from the central point of the DJ booth. Emanating as they were from a single area and yet filling the entire room with light, the Rogues made the DJ booth appear as if it were indeed a spaceship bearing an extraterrestrial visitor coming in majestically for a visit to planet Earth.

“Jon Antoine’s design created a powerful impression,” said Abbas Ritscher, of The Design Oasis. “He did a masterful job creating an endless variety of looks with these fixtures, which really fit this project perfectly.  One of the things that I like about the R1 FX-B is that it gives a designer so many different options.  You would never have guessed that only 12 fixtures were creating this variety of looks.”

The Rogues, said Ritscher, really helped to transform the room and challenge the imagination. That is, of course, the point of art, regardless if it involves painting, performance or lighting design.