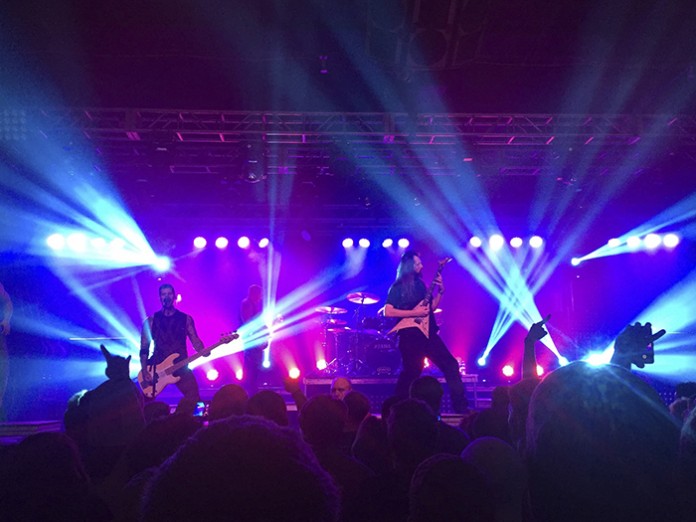 All That Remains and We Came As Romans shared a mutual admiration for the lighting designs that Lighting Designer Peter Therrien of JDI Productions created using a collection of Nexus Aw 7×7 warm white LED panels and Legend moving heads from Chauvet Professional.

Therrien said: “You always like to get good feedback when you design, so all of us involved in this show were thrilled when the bands went out of their way to compliment us.

“Aaron Patrick for ATR and Bryan Campbell for WCAR both commented how happy they were with the package and how the lighting had added an impressive visual impact to their performances.”

Like their legion of fans, the two bands appreciated how the intensity of the beams from the Chauvet fixtures accented their musical style.

He continued: “This is intense music, so we didn’t want there to be anything shy about the lighting. The brightness and intensity of the Nexus Aw 7x7s and the speed of the Legends really fit the moment.”

Another Legend 230SR Beam was placed on the deck four feet in front of the truss tower. Going across the back of the upper riser about two feet off the deck were a third 230SR Beam and three Legend 412 Washes.

He commented: “This configuration allowed us to shoot lights from different layers of the stage as well as different heights.

“I ran the 7×7’s at full intensity at all times except in between songs. I’d also bring them down to about 70 percent when they were directed at the audience. We did this when Phil Labonte, the lead singer for All That Remains, wanted a reaction while he was talking to crowd.”

Therrien pixel mapped the Nexus panels to create different chases and waves throughout the show. Also, when the show opened, he pixel mapped the panels under the large drum riser to spell ATR while the rest of the stage was blacked out.

Discussing his gear list Therrien noted: “The reason I decided on these fixtures is I’ve used them all before and loved them. The 412’s give a nice colour wash to the stage and the beams are bright, sharp, and colourful, so the movement and colour they provide work well for both the active pop and heavy intense songs that both bands sing.

“Also, even though they’re metal icons, both bands do a few ballad-type songs and the gobos in the beams create really cool looks during those tunes.

“The 7×7’s worked great on many levels, I used them as audience abuse-type blinders. Plus the chases and waves always made it like something was moving or happening on the stage.”

He concluded: “During my focus time and pre show, everyone always commented that I was turning on the sun when I switched the Nexus panels on. It’s fair to say they made a very powerful impression on everyone involved in the tour.”