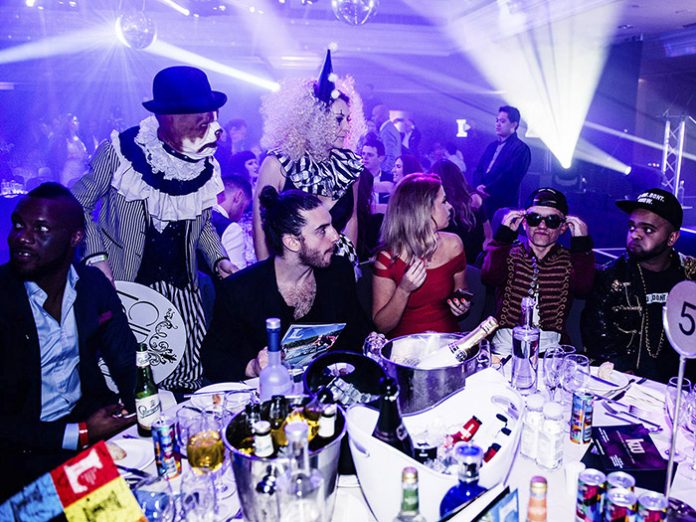 The annual London Club and Bar Awards has been celebrating the city’s thriving hospitality industry since 1994. This year’s event, which was held at The Intercontinental Park Lane, served up more sizzling glitz than ever, thanks to a stunning lighting design by Halo, which featured eight Maverick MK2 Spots, eight Maverick MK2 Washes, four STRIKE 4’s and 12 Rogue R1 FX-Bs from Chauvet Professional.

At the heart of the design was the brilliantly lit main stage that was used for the awards ceremony. Yann Guenancia, Halo Project Manager, drew on the intense output, rapid movements and brilliant colours of the Maverick lights to create a compelling sense of on-stage excitement.

Positioned from ceiling truss above the stage, Guenancia made use of the 440W superior brightness of the Maverick Spot fixtures to ensure excellent illumination of the award presentations. “The Maverick Spots provided the kind of powerful spot lighting you’d expect from an awards dinner of this calibre,” he said. “We were able to create a variety of captivating looks with these spots.”

In addition, Guenancia positioned 8 Maverick Wash fixtures to build a backdrop of saturated colours on stage and ambient lighting where necessary. “The wash fixtures performed especially well thanks to their saturated colours and pixel mapping capabilities,” he said. “The combination of the Maverick Wash and Spot fixtures provided a solid visual base upon which to build some more experimental and edgy visuals to appease and surprise the bar savvy crowd.”

One of the most well received lighting additions to Guenancia’s rig were 12 Rogue R1 FX-B fixtures, which were positioned at the back of the stage to deliver dazzling eye candy and interesting visuals to the awards ceremony. “I was able to achieve completely new and refreshing looks by utilising the R1 FX-B’s infinite rotation effects,“ he commented.“These fixtures enabled us to come up with some really unique visuals, and helped to award the room with more of a clubby vibe.”

Utilising the pan and tilt for the Rogue R1 FX-B’s 5 individually controllable heads – each powered by a pixel mappable 15 W RGBW LED – Guenancia was able to accentuate key moments within the awards presentations. To complete the lighting rig, he positioned four STRIKE 4 fixtures intermittently at the back of the stage between the banks of the FX-B fixtures.

“The strength of the STRIKE for audience blinding was incredible,” commented Guenancia. “I love the STRIKE’s four tungsten emulating light sources and dimming curve. They really added a classic feel to the event.”

Thanks to the Chauvet Professional fixtures, Guenancia was able to create a whole spectrum of looks to salute the last twelve month’s worth of nightlife achievements. “The London Club and Bar Awards is one of the most rewarding and difficult events on the calendar,” he said.  “I know from previous experience that this is a tough crowd to please. With the Chauvet Professional fixtures, we provided some genuinely memorable looks for the event and ensured the crowd got the celebration they deserved!”