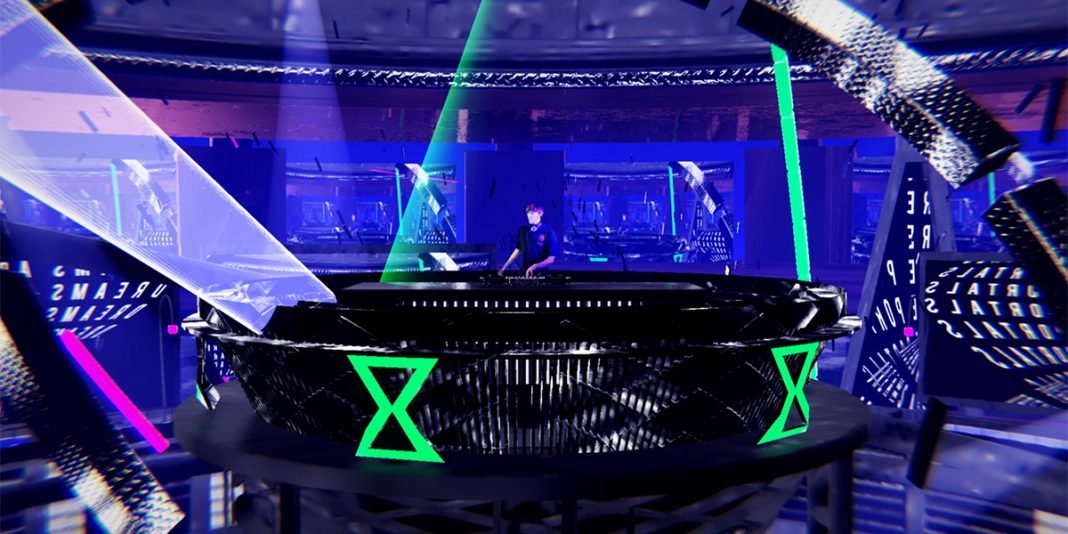 Since 2013, Motion Designer / VJ, Tanner Thompson has been freelancing at music festivals and creating custom motion graphics for concerts and shows full time. In 2019, motion graphics studio T2 Visuals was officially established in the live event and music space.

For two-and-a-half years, Notch has been integral to motion graphics studio, T2 Visuals’ workflow. “I took the training when it came to LA in April 2018,” began Thompson. “Since then, it has been a really great tool to learn and experiment with. The power, flexibility, and speed of Notch allows me to accomplish a lot in a short period of time – speeding up processes such as rendering out content and allowed us to experiment in this virtual real-time environment.”

With his sights set firmly on the future of real-time content and exploring innovative technologies and approaches, Thompson shared his Notch experiments with the DJ and Producer, Tyler Marenyi, better known by his stage name, NGHTMRE, and his team, who were interested in pursuing an experimental direction.

By late April, Thompson had formalised an initial game plan to create and feature as many unique Notch scenes and FX as possible with the time available in NGHTMRE’s forthcoming livestreams. The first, a private stream for students at University of California, Santa Barbara, led to the band’s first livestream with League of Legends and increased development and new Notch scenes for the Digital Mirage 2.0 YouTube Music Festival.

“It has been a constant process of refinement and experimentation since this project began,” Thompson reminisced. For Digital Mirage, the T2 Visuals team created a handful of different worlds to transport the viewers as the concert was streamed. The show began in an abandoned city, inspired by the DJ’s Portal Tour poster. “We then go through a wormhole that took us to a series of other thematic lands.”

After landing in a virtual city, viewers arrived in a land that was inspired by subconscious surrealism. “We took inspiration from Salvador Dali, as well as other festival experiences and seemingly random subconscious surreal elements. We go back through the wormhole and arrive in a landscape that was inspired by a balance of nature and man,” Thompson commented, pointing the trees, plants, and hybrid human/natural elements in this landscape. “The final scene was inspired by a futuristic city and future club environment. Each land has unique elements as well as a constant stream of VJ visuals feeding the environment.”

Following the Digital Mirage stream, Thompson collaborated with Pete Thornbury to create a custom TouchDesigner method to translate lighting data from an MA Lighting grandMA2 into Notch for a simulated concert lighting experience. For Lollapalooza, Thompson wanted to remain true to the festival experience – commissioning a 3D photogrammetry scan of the Grant Park region of Chicago where the Perry Stage would have been for Lollapalooza 2020. “Lollapalooza was our first time implementing this new strategy for lighting. We also utilised photogrammetry to recreate the Chicago skyline where Perry’s stage would normally be in Chicago,” he recalled. “It has been great to work with the NGHTMRE team to continue the developments to this project, giving us something to learn and grow from during this this strange period.”

Notch has been a key tool to T2 Visuals’ workflow for the past few years. “During the initial downtime, it was imperative for us to spend our newfound free time experimenting with the available technologies,” Thompson explained. “Around this time was when Notch first started to support the newest Kinect device. I had ordered a few of the Kinects out of curiosity a few months before the COVID-19 crisis hit the United States and quickly focussed on ways to utilise this technology to expand our capabilities in the virtual space.”

The NGHTMRE team afforded T2 Visuals free rein with the creative execution of the project. “We wanted to remain in sync with the existing branding and concert experience that NGHTMRE was touring with up until March,” Thompson explained. “He had to cancel the last few shows of his Portal Tour and really wanted to bring a unique experience to the fans that were not able to see him live,” Thompson said, pinpointing this moment as a turning point.

Having spent time formulating a game plan and design direction, he created a document with influences for each world that he wanted to include. “His tour was themed around the idea of a portal, so that was a great jumping-off point to see what was possible,” Thompson reported. “One of my main goals was to use the portal element as a constant theme in the show, but also use it as a transitional element to progress our visual journey. The portal sucks us through a wormhole several times per streaming experience to introduce a new landscape and visual experience as NGHTMRE’s set progresses.”

Thompson explained the “new set of rules and possibilities” when you are dealing with a streaming platform. “It has been great to see the live chat aspect of the livestreams and being able to see the comments and interact with the chat in real time is a unique and fun experience,” he commented. “We are just scratching the surface of what is truly possible in the interactive streaming experience. I have seen some really great projects since the start of the COVID-19 pandemic, that have been truly innovative and fun to see how people’s experimentations and projects have developed over this time.”

Motion Designer / VJ, Tanner Thompson of T2 Visuals is among the growing number of creative minds operating in the live event realm pivoting their skillsets to cater for the growing demand for interactive experiences for live music fans – harnessing the creative capabilities of Notch VFX to reimagine DJ, NGHTMRE’s live shows in a virtual arena for Digital Mirage 2.0 YouTube Music Festival, Lollapalooza 2020 and the band’s first livestream with League of Legends 📹 ⠀⠀⠀⠀⠀⠀⠀⠀⠀ Read more in the latest issue of TPi 🗞 ⠀⠀⠀⠀⠀⠀⠀⠀⠀ 🔗 in bio ⠀⠀⠀⠀⠀⠀⠀⠀⠀ 📸: T2 Visuals

This global pandemic has truly inspired innovation out of necessity. “It has felt as if our only real option for growth was to innovate and experiment with alternative execution options,” Thompson said. “Our year would be very different if this pandemic was not with us. It is certainly a challenge to grow and adapt, but it has been such an important experience for us – one that has emphasised the necessity to stay nimble as a company.”

Thompson outlined the company’s strength is its smaller footprint. “It has allowed us to take risks and change directions very quickly,” he commented. “It has also emphasised a desire to grow the company as a versatile entity. I don’t want to get stuck in one execution or technique for too long. It has been a great exercise to navigate this uncharted territory.”

The main challenges during this string of livestreams related to time constraints or technology hiccups. “During the first stream, we experienced issues with the Kinect and that was a huge headache. I found a workaround, having to rebuild my Notch scenes hours before we recorded, but I was glad we were able to power through that technical hurdle and still produce something we were proud of,” he said. “Our timelines were often rushed to execute as much as possible in a short period of time. This was strenuous on some of us and added pressure to the project, but it was great to push past those hurdles and setbacks. After all, the show must go on!”

Recalling the overjoyed fan reactions to the NGHTMRE streams, Thompson was pleased to still be making art and collaborating during an uncertain summer. “It is still such a new approach that the average viewer can still be tricked into entering this space where the technology is simply magic,” he concluded. “I feel that we will continue to see bolt-on virtual experiences for live events even after this strange time is behind us. It has been an interesting shakeup that truly has propelled the AR/VR space.”