Identity won the tender to deliver London’s official New Year’s Eve celebration for 2023. Celestial was appointed by Identity in early November 2022 to deliver the drone show as part of the celebrations. Multiple site locations across central London were reviewed before deciding to use Horse Guards Parade for the show, marking the first time any one had been given permission to fly a drone swarm in this location.

The creative design was developed by Celestial under a tight brief from Identity and the GLA. The show featured 400 drones, and included a countdown to midnight and a tribute to the late Queen Elizabeth II and the incoming King Charles III. As Celestial’s first show broadcast live on television, the pressure was well and truly on. However, as TPi discovers speaking to Celestial CEO, Tony Martin, Production Designer, John ‘JP’ Partridge, and Head of Animation, Anthony Head, retrospectively, the project was delivered ‘flawlessly with spectacular results’.

What is your relationship with the partners and supporters involved in this project, have you collaborated with Identity and/or GLA in the past?

Tony: “This was a very complex, multidisciplinary event with lots of talented, creative contributors. We were brought in as the drone experts to add an aerial dimension to this high-impact and internationally recognised event. We didn’t have a relationship with either identity or the GLA in the past, but we were evidently on their radar because of the visibility of the international roster of shows we’ve delivered over the past two years. Those award-winning shows certainly acted as an effective calling card for us and allowed both identity and the GLA to know that they were working with a trusted partner who could deliver on time and on budget with the highest levels of creativity.”

Roughly, how many people from Celestial were involved in the project and what were their respective roles?

Could you talk me through the creative design, what was the discussion process behind this project?

Anthony: “The GLA wanted an iconic show that stood out from other New Year’s Eve displays, mixing drones, fireworks and lighting. Working with Identity, Celestial provided creative and technical expertise to interpret the initial ideas into striking drone formations that could be animated into a final display. We carefully planned and timed the show, overcoming the spatial challenges of the restricted airspace surrounding Horse Guards Parade. We are proud that we created a show that befitted the magnitude of the occasion.” 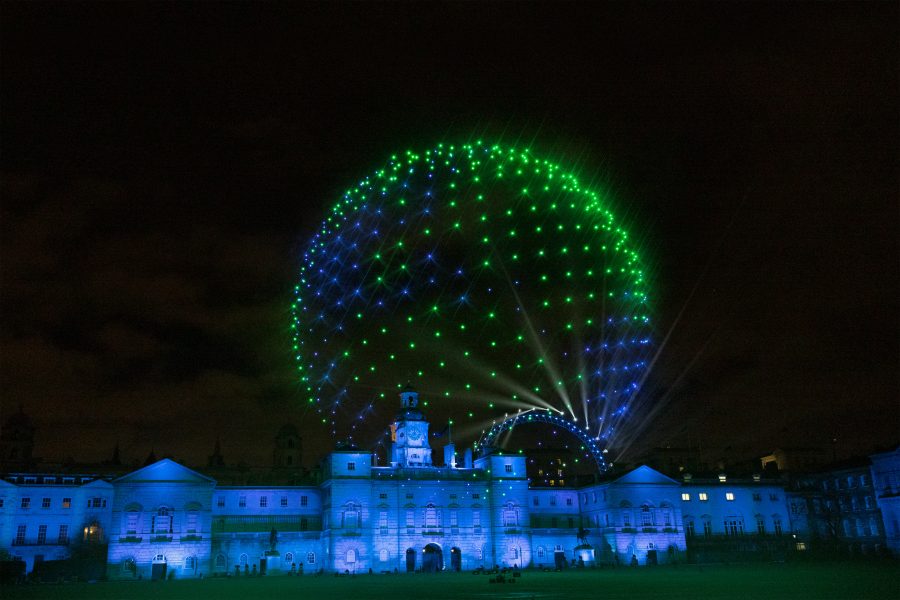 What were some of the key looks/moments of the performance and how were they achieved by the drones?

JP: “There were many great looks and moments in the show but we were especially honoured to be responsible for displaying the images of King Charles III and the late Queen Elizabeth II in the form of drones to a global TV audience. We put an enormous amount of care and effort into designing and hand-painting the portraits to create sympathetic and meaningful coin-based images, which would seamlessly transition from one image to another, emphasising the transition of monarchy. We are proud to have contributed to a truly memorable and moving moment in the show.”

Do you have any particular highlights from this project you could elaborate on?

Tony: “It was fantastic to see, for the first time, a drone show that worked effectively with a pyrotechnic display and a soundtrack. It was notable that the fireworks would pause and allow the drones to do their bit, and then the reverse would happen. The drones would pause and it’ll be back to an amazing firework display. This happened two or three times during the show and was incredibly effective. Another moment that springs to mind in terms of a personal highlight was that when I walked onto the Horse Guards Parade site for the first time on the evening of the show, I suddenly thought, oh my goodness they’ve closed this iconic location just for us. That felt very special.”

What technical and/or logistical challenges did you face, literally, getting this project off the ground?

JP: “Finding a suitable location to fly 400 drones in the vicinity of the London Eye was the first major challenge we faced. After careful research, Horse Guards Parade emerged as the best option, as it fulfilled all the technical requirements and provided enough of a safe sterile area to fly the drone swarm. Nevertheless, it posed a number of unique challenges, as gaining permission to fly 400 drones 50 metres away from 10 Downing Street is something that has obviously never been requested before. Thankfully, all the security services involved were highly cooperative, and the CAA did great work keeping the permissions and NOTAM hidden until the last moment, thus preserving the surprise of the display until midnight.”

What extra precautions and measures do you have to take or be aware of when curating a show which is broadcast live on TV?

JP: “Operational resilience is absolutely critical, simply the show must go on! We put in place a rigorous testing and rehearsal schedule to ensure that we had proven all pieces of hardware and the animation were ready to fly and that backups of all equipment were in place. We did all of our testing in a rural location, late at night to insure that the display stayed hidden until the 31st. Furthermore, as we were responsible for the countdown to midnight. It’s obviously critical that the show stays locked to timecode and GPS clock, we also had to factor in broadcast delay offsets to ensure that the flight stayed in sync with all other elements of the production and timed precisely with Big Ben’s chimes.” 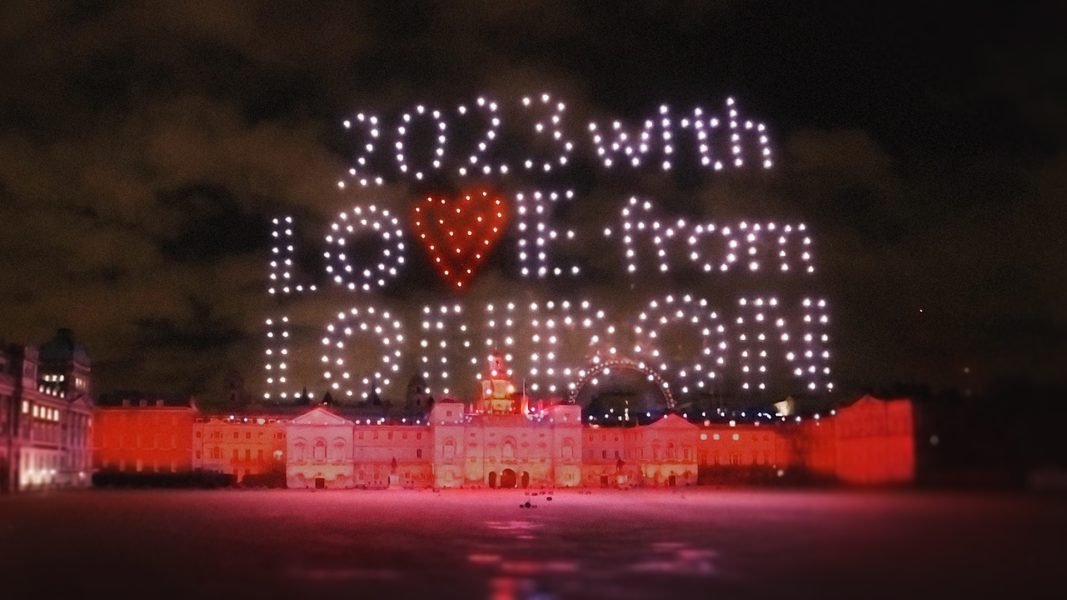 Could you sum up the experience, what was it like to deliver this ambitious project?

Tony: “This was certainly a landmark moment in the evolution of our company. It shows that we can deliver something at the highest levels of professional collaboration. It means that there is no show in the world that we will feel daunted by moving forward. What an amazing place to be just two years after our company launched.”