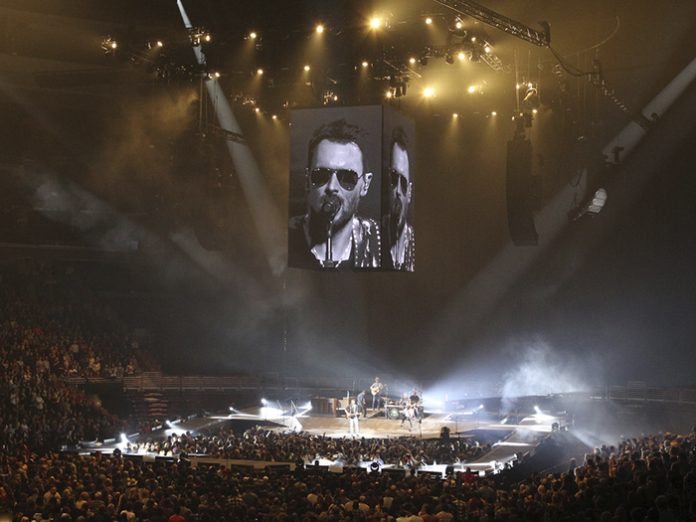 Country superstar Eric Church’s Holdin’ My Own tour begins to create an immersive experience for fans as soon as they enter the concert venue. Forget standard house lights. The first thing that strikes visitors when they walk into the arena, whether it’s Barclay Centre in Brooklyn or Staples Centre in LA, is the warm white glow from the 63 Chauvet Professional STRIKE 1 fixtures in Church’s touring rig.

Butch Allen of Blame Funnel Creative, who specced the multi-formatted STRIKE 1 units from Christie Lights, uses them in lieu of house lights to set an emotional tone for Church’s deeply personal tour. “We wanted the whole arena itself to be part of the show, to create a totally immersive environment, since this tour is all about Eric connecting to his fans,” said Allen. “The STRIKE 1s are our house lights. Then, once the concert starts, they emerge as the backbone of our show. They become 63 death machines!”

For the first 90 minutes of this marathon three-hour plus concert, Allen uses all white lights, anchored by his STRIKE 1 fixtures, which are flown on three massive rectangles: one over the main stage, one over the audience and one over FOH. Using white lights exclusively for this opening stretch underscores the concert’s elemental heartfelt theme.

“We light the extended opening of the concert with a variety of white lights with different colour temperatures to convey different moods and keep the show fresh,” said Allen. “The inspiration for having all white for an hour and a half came from the STRIKE 1s.  They create a variety of looks for us, going from being gentle audience washes, to blinders, to strobes at different points without missing a beat and they put out a ton of light. The looks we can get from them fit so perfectly into the mood of this concert.” he continued.

Church, who has used pyrotechnics and dramatic production elements on his past tours, wanted to evoke a warmer more engaging mood for Holdin’ My Own, which has him powering his way through 38 songs in two sets with a short intermission. “This concert is really a basic emotional exchange between Eric and his fans,” said Allen. “There are no opening acts. It’s just Eric, his music, and his fans.”

Creating a variety of interesting looks over such a long concert was not difficult, according to Allen, in part because of the diversity of Church’s set list, which blended the artist’s classic and new hits with songs from non-country stars like Bruce Springsteen and Billy Joel. Also deserving credit are Programmers Scott Chmielewski and Rob Koenig as well as Lighting Director Gavin Lake.

“I am fortunate to work with this group,” said Allen. “Scott and Rob contributed so much to the creative outcome and Evan has managed the tour beautifully. It’s been a great team effort, between us and Eric Church’s crew.”

The light show that resulted from this effort achieves a spot on balance between supporting Church’s power driven sound without detracting from the sense of intimacy that runs throughout the concert. After the opening 90 minutes of white light, Allen incorporates colourful beams and washes to accent key moments. Through its constant changes, his light show keeps the audience engaged without ever taking their eyes off the star they came to see.