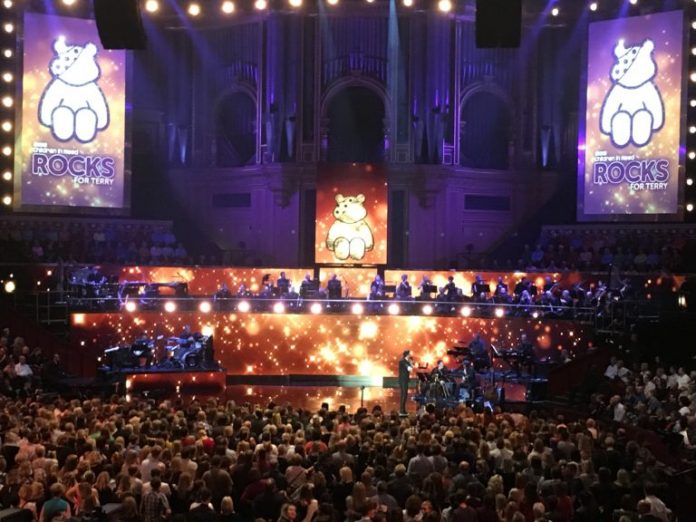 In amongst the blizzard of important one off events that have peppered the autumn schedule of London venues, the Children in Need Rocks Show at the Royal Albert Hall AH on 1 November surely stands out as one of the worthiest. It also ran to the tightest of schedules. “The Royal Albert Hall is always busy,” commented Britannia Row’s Project Manager Lez Dwight, “but this was exceptional. It saw a Britrow crew load in just after midnight for rehearsals commencing at 2pm that Monday afternoon, with the show on the Tuesday, 1 November.”

The show was in part a tribute to Sir Terry Wogan, the sadly missed BBC Radio 2 presenter who was one of Children in Need’s staunchest advocates. Stars willing to offer their talents for such an event were not in short supply: the show featured Olly Murs, Ellie Goulding, Rick Astley, Beverley Knight, Alfie Boe & Michael Ball, Take That and Gregory Porter.

“It was a tricky high-rigged system to avoid blocking camera lines; we designed an unusual deployment of L-Acoustics K2 with a comprehensive array of fills to ensure everyone heard these spectacular performances in all their glory,” said Dwight. “Two SSL consoles were used FoH and one DiGiCo SD5 for monitors. An SD10 was used to provide stems of the orchestra and the one hundred strong choir to FOH and to broadcast. We used two crews, one to rig and de-rig with a fresh team to manage and run the system during the show and rehearsals.”

Organised and managed by Chromatic Production’s Steve Nolan, he took particular satisfaction in being asked to oversee such an occasion: “When everyone is a professional and plays their part properly, with confidence and efficiency, then calmness prevails. That’s what we got on the day; a busy show packed with fantastic performances. Behind the scenes it all ran incredibly smoothly. You can’t ask for more.”