In July this year one of the world’s biggest electronic music festivals, Tomorrowland, returned to the 75 hectare recreation area De Schorre in Boom, Belgium for its 13th edition. Over three days some of the worlds biggest names in dance music including Deadmau5 and Armin van Buuren, performed over 16 performance areas against a backdrop of jaw-dropping sets, intense laser shows and spectacular firework displays.
Tomorrowland’s 2016 main stage, designed by Patrick Moerland and created by Brilliant Stages, comprised a 120m enchanted forest landscape built around a magnificent central 25m, 3D tree which was set against a cluster of bas-relief trees studded with additional detailed such as doorways, pipes, platforms and canopies.

This is the second time Brilliant Stages and Tomorrowland have collaborated on the main stage set with the staging company supplying the clock face for the 2014 edition of the festival.

This time however, Tony Bowern and his team at Production Park took on the vast majority of the build, with Jacqui Pyle overseeing the creative direction of the project.

The Brilliant design team worked from a very detailed, hollow, gaming model of the outer skin of the set provided by Moerland, designing a structure that was engineered to support the load for platforms, ad-ons and inflatables whilst still retaining Moerland’s original vision of intricate organic tree shapes and forms.

Brilliant’s Asset Design Manager, Giorgio Castronuovo explained:
“We decided on a process that partly derived from the clock face we made previously for the 2014 festival which used a sandwich of very thin ply and foam. This lead us to the path we took this year which utilised hand sculpted foam which was then hard coated so it could be scenically treated with various different artistic textures and effects.”

Castronuovo continued: “The biggest challenge came from the organic nature of the design; there were no straight lines, symmetry or repetition so every single element had to be drawn by hand which made it complicated, but we didn’t want to compromise on the overall look of the set.”

Stephan Saliba, Scenic Workshop Manager, drafted in a team of 11 artists, sculptors and carpenters from the Maltese film industry to help creatively realise the project. The team of artists joined a mammoth team of 74 creatives, engineers, fabricators, designers and sculptors who worked at Production Park.

The scenic process began with interpreting the initial drawings and designs by Patrick into 3D pieces explained Saliba. The team created a scale, clay model of the full set that was then broken down into sections and distributed to different creative teams who then worked on carving the outer sections of the 25m trees from 2.5m long x 0.5m high x 1m deep blocks of polystyrene.

Once the 3D forms were completed by the sculptors, the sections were then hard-coated and passed to the artistic team who painted the sections using layering techniques to create the appearance of bark. 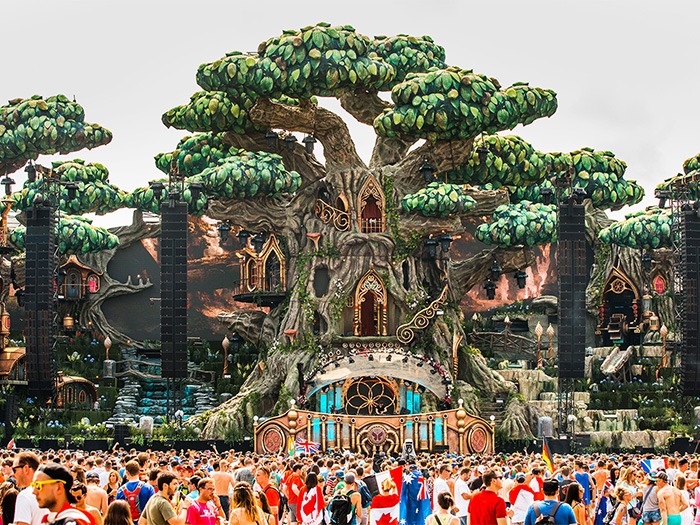 These completed sections were then taken into the main studio where a 21m x 18m scaffold was used for pre-building the structure, ensuring that each section fit within the rest of the elements around it.

Once the team were happy with the completed section, textures and paint effects were re-touched and the add-on details, which were scenically treated with gold leaf, were slotted into the main structure of the trees.

Central to the main 3D tree was a tubular support system for the branches which also acted as support for the bark, which consisted of a mesh, expanding foam and hard coat assembly. This bespoke scaffolding fixture was then interfaced into the central scaffolding which was supplied by Stage Co.

Managing Director of Brilliant Stages explains: “In order to facilitate the quickest installation possible we custom made Brilliant Stages extrusions which gave us the ability to fit bespoke clamps to the bass relief sections; this allowed us to adopt a fairly rapid build both in the studio’s and on-site in Belgium.”

The main central tree was made up of over 60 pieces not including all the many intricate, doorways, stain glass windows, railings and inflatable leaves, supplied by Air Works, that sat on top of the branches.

The first container travelled to Boom on the 4th of July in preparation for installation which began on the 11th with a team of eight who started to re-assemble the set on site. This team grew to over 30 in the final days of the build with pieces of the set arriving at regular intervals from Wakefield.

The main stage set took approximately 780 blocks and 430 sheets of polysterene and over 40,000 man-hours to build.