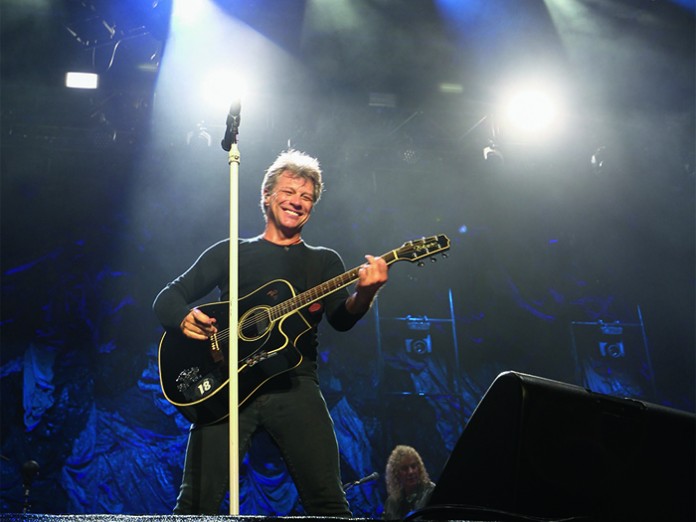 It’s been a couple of years since TPi covered a Bon Jovi gig, a world tour that hurtled its way full throttle into UK stadium venues, the way a rock band of their calibre should. This time, we’re dissecting the New Jersey band’s performance in Abu Dhabi, the first concert in the UAE’s capital following a three-month live production break. Turns out, it was worth the wait, as TPMEA’s Kelly Murray reports…

The du Arena in Yas Island is a buzzing live venue, a venue which has seen some of the world’s most popular performers grace its stage and a venue that has Abu Dhabi’s premier live event promoter, Flash Entertainment, at the helm of relevant and enticing line ups.

Vice President of Operations at Flash, Lee Charteris, spoke to TPMEA about the role the company plays. “It’s true to say that contracting and finalising events may take a little longer here than in Europe or North America, because our show date is often at the tail end of a run, or is a one off concert. Artists typically touring with their entire production come to the UAE with just a small part of that – such as backline, control packages and wardrobe – and we then have to replicate a touring show with our local sound, light and video suppliers, which means the rider that we receive is customised for our event.”

For Bon Jovi in particular, the band returned to Abu Dhabi by popular demand, as Charteris explained: “Who we book is totally driven by the touring market and artist availabilities; we are constantly in contact with agents. Seven years after I started Flash, all of our suppliers are well-versed in presenting the likes of artists such as Bon Jovi, and all that it takes to produce an event of this stature. In the very beginning, there was a lot of ‘hand holding’ between us all, but the market has grown up and that trust and support has enabled us to get on the map as a ‘stop off’ for many tours now, because production managers and bands know what we can offer. “We see quite a few acts wanting to come back to the UAE after the first time they play here and that for me is testament to the shows we produce and also to the way in which they get looked after over here.”

Charteris is also very hands-on for a VP, which undoubtedly makes a difference: “I pride myself on being on site at all of our events. After nearly 40 years in the job, I’m still looking into and learning about the live event business. I like to see ingress and egress and I love seeing the start of any show; I still get a tingle of excitement during the start of the process!”

Bon Jovi travel with their own Stage Manager, but upon their arrival in the UAE, were greeted by Gulf Crewing’s Nigel Beaton who acted as a facilitator for the touring crew and the local production team. Beaton said: “It was a more compact version of their usual stadium shows but I believe that with the infrastructure that has been built up in the UAE, the quality of the lighting, video, sound and staging companies can honestly match the service and skills seen anywhere else in the world.

“Let’s not forget the talent that we have working in the background from production managers to artist liaison officers to wardrobe assistants and all the advance site and stage crews. Over the past few years, we have invested a lot of time and effort into making this region a destination that large tours want to return to, and having Bon Jovi open the new season is a perfect example of that.”

“This was the first time I’ve worked with Bon Jovi, but we work with Flash Entertainment on a regular basis and have a great working relationship with both their operations and projects teams,” explained PRG Gearhouse’s Damien Jackson, who supported the technical needs of the show’s visuals.

The band’s Lighting Designer, Sooner Routhier, and her rider led the lighting rig. Jackson continued: “Sooner was great to work with and there was plenty of communication between her and myself prior to the load-in to make sure I knew exactly what she was expecting for the show. She was flexible on a couple of fixture substitutions and as her preferred profile fixture is the PRG Best Boy, she was happy that PRG was the provider in Abu Dhabi.”

There were also 16 Clay Paky Sharpy Washes and eight SGM P5’s requested for the rider. For control, MA Lighting grandMA2 desks were chosen for operation and backup.

With such a smooth transition with the lighting rig, and a simple IMAG implementation for video, were there any major challenges? “Weather is always an issue out here – as it’s always too hot!” he laughed. “The pre-production between Flash, the tour party and myself was very well detailed, so we met no challenges. We had plenty of time to get the prep completely right, which made for a simple load-in and the rig was flown before lunch time.”

Audio supplier, Delta Sound, worked closely with Bon Jovi’s touring crew who provided their own control, microphone packages and split systems. However, Delta was asked to have a DiGiCo SD7 console on standby for local backup. Delta’s Sound Engineer, Rob Eatock, detailed: “In addition to Bon Jovi’s show, we provided a control and microphone package to the local support act that included a DiGiCo SD11 console at FOH with a DiGi Rack on stage, and a Yamaha PM5D for the monitor control board. A selection of Shure and Sennheiser microphones with Radial DI boxes accompanied the band’s instruments on stage.”

Continued Eatock: “It was great to finally see Bon Jovi live. They sounded great and had a really good energy on stage – considering the high temperatures and ridiculous humidity we face here!”

All Event Services – AES – which works very closely with the German side of staging titans Stageco, provided the main staging elements for the show in the form of the company’s 4 Leg Classic Super Roof, and The Hospitality Staging Platform, which was constructed out of a large quantity of Layher event flooring and scaffold products.

JJ Trichardt, Managing Director of AES explained that, from a Health & Safety stance, AES prides itself on being on the forefront of the latest industry standards: “We have a new edition to the Group-48.3 International Design and Technical Services, which provides CITB scaffold training, complying to the latest structural standards and scaffolding regulations from the UK and Europe.”

AES has also implemented the new CDM regulations and is a contributing member of ILEA. Continued Trichardt: “We aim to provide an unmatched service from inception to completion to create balanced projects that stand as testament of our corporate policy. We work hand in glove with a number of international suppliers to ensure that the Middle East is provided with the highest quality technological advances and products, while operating in a dynamic and competitive market.”

At Bon Jovi’s concert, AES also supplied certified crowd control barriers, Heras fencing and some law enforcement barriers for extra safety. For personnel, only full time AES-employed crews are dispatched to carry out the staging setup and break down. A total of 40 certified crewmembers were deployed during a four-day build.

Trichardt continued: “We are a connected team where the individual is valued and trusted, based on years of experience in the field. This enables timely decision making, effective communication between all members and creates a sense of trust between clients and team members. Bon Jovi’s show was a great success which demonstrates what knowledge and coordinated communication can achieve.”

Ensuring the power supplies were met safely and accurately was Project Manager Michael Kennedy of the eclipse Group. He told TPMEA: “I actually worked on the opening night of this tour in Jakarta, Indonesia, which was a stadium show for 45,000 people. We didn’t face many challenges due to the superb advance work, and when the tour landed in Abu Dhabi, the crew was already confident that everything was under control.

“The transition from the advance guys to the show was faultless. It’s always a great feeling knowing that a tour has full confidence in your delivery from the instant they land.”

Briefs for the power element of shows are always very last minute as they heavily depend on the other requirements being finalised. Kennedy continued: “The ability to pre-empt a number of variables is something that comes with experience; for pre-production, knowledge of the local venue plus the insight provided by the advance work undertaken from the production team is imperative to a smooth delivery on the night.”

“eclipse is the tour’s in-house power team and we know this venue very well, having worked closely with Flash for a number of years. We have this arena running like a well-oiled machine!”

For the stage power, eclipse provided 1MW of power to accommodate lighting, video and audio. “This was split into different supplies in order to provide the right power distribution to the right disciplines. Lighting ran from a 400Amp 3phase and a 200Amp 3phase supplies, the video element ran off a 250Amp 3phase supply that was split into the stage left and stage right IMAG screens, and the audio was fed from a 200Amp supply.

“One of the biggest challenges we face is the ever-increasing demand for a ‘festival style’ approach to concerts in the way that food and drink villages are wanted by the audiences. It seems to be a current trend to utilise street food trucks at concerts, and they have a high demand for power.

“The power department have and always will try to utilise as much locally-supplied power as possible so the team will constantly strive to minimalise the usage of generators and always opt for the shortest-running time possible. We also constantly monitor the quality of the fuel supplies and only accept fully serviced generators so as to reduce the emissions caused through generated power supplies.”

For this event, eclipse chose Aggreko generators, which run on diesel fuel. Kennedy enthused that eclipse keeps its power department in check at the highest certified standard and all of the team carry a number of qualifications from BS7909, a certification in temporary power solutions to the events industry to IPAF – a qualification in operation of mobile electrical work platforms. “One of our biggest selling points is our dedication to H&S. The production teams work very closely with our in-house H&S manager to constantly produce the highest possible standard on and off site.”

PRG Gearhouse’s Damien Jackson summed up the event: “This was a great show and a fantastic gig to start the season off. There was a big sense of excitement and expectation around this gig and the crew was ready to get going again after the summer break. It was a complete smooth delivery from our side and the band’s LD, Sooner, and her team left extremely happy with the hospitality and technical support they had received in the Middle East, which for me is the biggest compliment we can receive.”

Between the key suppliers, and Bon Jovi’s own crew, their Abu Dhabi performance went without a hitch and set the bar for the next chapter of MEA live events, much to the satisfaction of Flash. Charteris concluded: “As the promoter, I really want audiences here to see the same quality show that fans in London or New York will see – performers presenting themselves in all their glory.”

If this is the production standard in Abu Dhabi, there’s little danger of letting any fans down, and we’re looking forward to what the live entertainment circuit here will deliver next…

Beats In The Bush