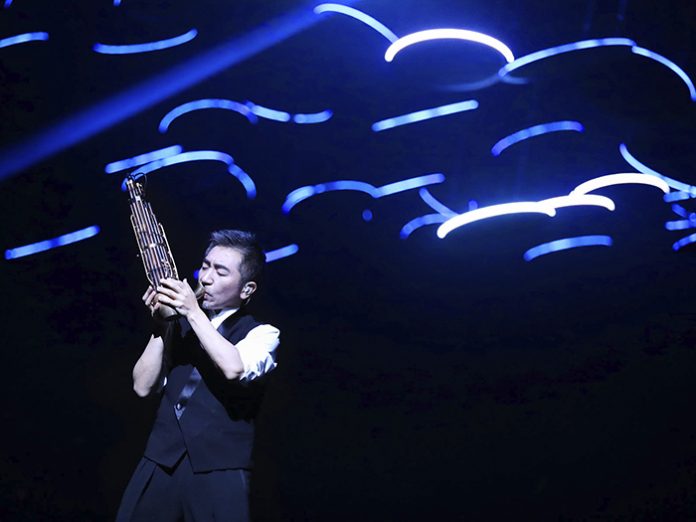 Lighting / visual artist Christopher Bauder from Berlin based WHITEvoid was asked to reimagine his ground-breaking Mirror Mirror kinetic lighting installation for the 2019 world premiere of the new BMW 7 series which took place in Shanghai, China.

He used 52 circular shaped Kinetic Lights mirror disks which worked in conjunction with 42 synchronised Robe Pointe moving lights plus one MegaPointe to stun the 500 VIP guests in the majestic former industrial environment of the West Bund Art Centre, Shanghai.

Bauder was commissioned by show producers China Kingway for whom he’d previously delivered the initial Mirror Mirror in 2018 as a stand-alone segment making up Apologue 2047/2, a work directed by Chinese film director and former cinematographer Zhang Yimou.

This time, the show was directed by Mr Bao, CEO of China Kingway assisted by LuLu He and also featured a special electronic soundscape by composer Kanding Ray, combined with a live performance by famous Chinese sheng player Wu Tong. The sheng is a traditional Chinese mouth-blown free reed vertical pipe wind instrument.

The show needed to highlight the styling and proportions of the cars and create a great ambience and anticipation for the reveal, so they developed a series of three-dimensional tableaus that would interplay with artefacts from automotive environments – like streets, landscapes, architecture and nature.

The 52 mirrors – each controlled by three custom Kinetic Lights winches – were arranged in a seven by seven grid over the stage with the Pointes rigged in three rows of 7 fixtures – 21 a side – on stage left and right of the presentation area.

Unlike previous shows, in this setup they had a completely symmetric and square shaped arrangement that was designed to fit the wider-angle shape of a presentation that was focussed on the cars.

The 42 Pointes and single MegaPointe were used to create the 3D light tableaus in different sections of the show.

The first row of Pointes each side was 2 metres off the floor, the next was 4 and the final one was 6 metres, with around a metre of horizontal space between each fixture.

The MegaPointe was used to create a large ‘7’ sculpted from light – using the mid-size beam reducer gobo – for the show finale. It was mounted beneath the stage that was covered in a glass sheet so the cars could roll over it.

The MegaPointe beam shot diagonally into the roof and was deflected by a 45-degree mirror which flipped it into a horizontal beam. The end of the beam was defined by a black stopper plate also attached to three of the kinetic winches enabling the ‘7’ to appear in split seconds out of thin air.

The MegaPointe he chose for its flexibility and specifically its CMY colour mixing and multiple beam shaping options, together with the “super-bright and sharply defined flat-field beam”. He underlines that these characteristics are particularly important when working with light as a material combined with beams and haze to make clear lines in a space.

“It’s really perfect for solo highlight effects like this” he stated, where they required one searing beam to be reflected along multiple mirrors and bend in mid-air.

Kinetic Lights’ own bespoke KLC Software was used to animate, control and safety check the whole system and all elements involved, which allowed super-fast calibration of the moving lights and mirrors on the motorised winches, all in one control environment.

Bauder explained that it’s especially important to have a reliable and fast method to synchronize both lights and kinetic elements whilst moving everything at the same time in a 3D space.

They used the system’s integrated realtime 3D visualization for pre-programing of the show, including all the physically correct angles for the effects of the reflected light beams, and this meant that once on site, they only needed to make minor adjustments to transfer the computer-generated show into the real space!

The main overall challenges of the project were the short setup window – three overnight sessions – in which they had to install and calibrate a complex interconnected system. This included the 153 winch motors and direct ArtNet cabling in the roof of the building, and the 43 moving lights running via DMX from the three rows each side of the stage.

Each Pointe could hit any mirror at any time in full motion, so once calibration was complete, they ensured that all the Pointes were corrected to match their digital simulation.

It is also only working in actual reality that they can fully appreciate the effects that were created in the visualiser software. Only at that stage do they know for sure if the sounds match the power and output of the lights at certain moments or if the colours and intensity will support the dramaturgy and choreography of the show.

“I think we captured the spirit of modernity and forward thinking that BMW has out right at the core of the car, and that was our mission” concluded Bauder.