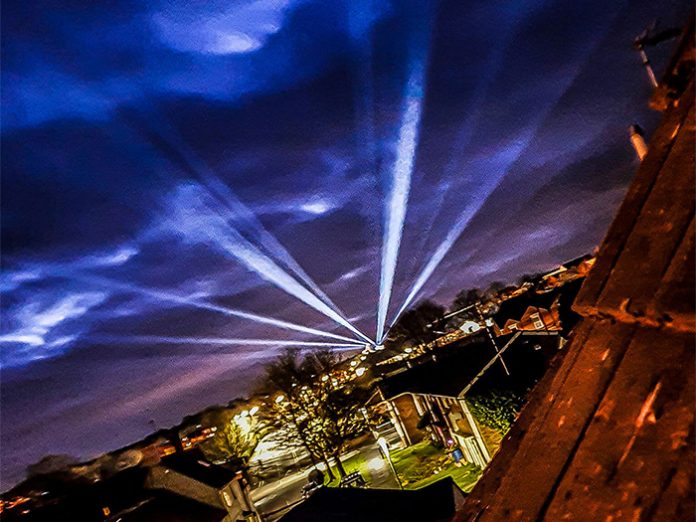 Dan Ridd and Steven Haynes of Clearsound Productions in Shipston-on-Stour, Warwickshire, UK positioned eight Robe MegaPointes on the roof of their warehouse –and beamed them around the town and up into the night sky, creating a unique piece of light art to connect the local community and show support for the incredible efforts of frontline and essential workers and the National Health Service (NHS) during the Coronavirus pandemic.

The action was inspired by the now weekly Clap For Carers initiative (started in the UK by Annemarie Plas) which united millions across the country who appeared in windows and doorways clapping and rattling or thumping percussive objects, the first of which had happened at 8.00 p.m. on the previous Thursday.

This prompted Ridd and Haynes to think about what you might be able to see, coupled with the magical effect that the medium of light can have in unifying people and environments.

Taking advantage of the warehouse being on one of Shipston’s highest spots, the following night – carefully observing the social distancing rules – the pair experimented with a couple of different fixtures positioned on the warehouse roof, and hit on MegaPointe as the perfect fixture to shine bright and slice through the darkness.

They then engaged in some industrious social media posting on the Saturday telling people in the area to watch the sky at 8.30 on the Sunday evening for a nice surprise which generated a buzz of interaction even before the impromptu installation started.

When the time came on Sunday – luckily a dry, clear, cold night with perfect wind conditions – Ridd and Haynes fired up the eight MegaPointes using a ChamSys console, and ran through a special light show which included the signature ‘NHS blue’ look that they chose for the default beam formation.

The interest and excitement were instant. “My Facebook literally exploded with cool comments and messages of support and the phone rang constantly for the half-hour that we ran the lightshow,” declared Ridd. “I really wasn’t expecting such a massive reaction and it was a fantastic feeling to be part of generating a little wave of positive energy that was appreciated by so many people! It was also amazing just to get everyone talking and realising that none of us are alone in this!”

The powerful light beams could clearly be seen scanning across the whole town and were visible from up to 15 miles away in Banbury, Oxfordshire. Shipston-on-Stour’s Mayor, Dan Scobie, acknowledged the devastating effect of COVID-19 on the events sector and posted in support, “Clearsound Productions have done so much for the town. Instead of rolling over, they have responded in the best possible way with a spectacle for the people.”

Ridd and Haynes’s imagination also attracted national TV coverage including being interviewed for both the BBC and ITV channels. “We felt a bit like celebrities for a couple of days,” commented Haynes, “but it was just a simple idea to connect our community utilising the power, drama and playfulness of light”.

In addition to this, Haynes highlights another lighting-based initiative, #ourshininglight, which encourages people to light their houses – as, if and when possible – also in support to the NHS and the incredible job everyone in the organisation is doing.

Normally, Clearsound Productions is busy creatively lighting projects for a range of corporate and event-based clients for awards shows, gala dinners, conferences, etc., plus some summer festivals but now they join all the other event, rental and technical production companies who are trying to save their businesses and survive the lockdown period.

The company started investing in Robe around three years ago, and now have 90 Robe moving lights in the rental inventory, including MegaPointes, Spiiders, Spikies and LEDBeam 150s.